Interxion has a new landlord in Stockholm

Interxion recently opened a new data center, STO6, next door to this building. DCD has asked if the new landlord for its existing facilities will make any difference to its operations in Stockholm. 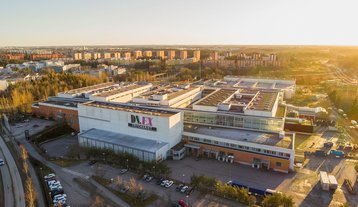 Brunswick does not mention Interxion in its announcement, describing the building as "a 63,000 sq m (680,000 sq ft) mixed-use property in Stockholm, which includes a data center, printing facilities, warehouse and offices." A Brunswick spokesperson confirmed that the data center belongs to Interxion, and the change of landlord is not expected to directly affect its business.

DCD understands that Interxion actually has some five facilities within Vanda 3, but it's possible Brunswick may be able to develop other parts of this property, which are not already home to Interxion.

Erik Rylander, the head of Stockholm Data Parks, welcomed the new owner of the property, saying: "I believe the entrance of Brunswick will be positive, as they will be looking to expand the data center activity in Vanda 3, with heat recovery."

Brunswick's head of innovation and communication Sara Svedjedal would not say anything specific about expansion within the property, but made it clear that the company is actively looking for development and acquisition opportunities across the Nordic region. Stockholm and the wider region are ideal for data centers thanks to the natural cooling and renewable energy available, as well as the connectivity, she told us.

The building, being sold by Bonnier Fastigheter, already contributes its waste heat to the district heating system of Stockholm, via Stockholm Data Parks.

Interxion has five data centers in Stockholm, numbered STO1 to STO5, and is developing a sixth one, STO6. The Interxion site gives few details about the first five, but all of them appear to be located in Vanda 3. Interxion gives their address as Esbogatan 11, which is the same address: it is at the intersection of the two roads, and pictures of the facilities are clearly of the same building bought by Brunswick.

Interxion announced its fifth facility in that building, the €29 million STO5, in 2017, shortly after the area became part of the Stockholm Data Parks initiative to promote sustainable data centers in Stockholm. STO4 was announced in 2014, and STO2 in 2013.

In October, Interxion opened the first phase of STO6, a new building on a brownfield site next to Vanda 3. This had been announced in 2019.