Company partners with Crown Oil to replace 45,000 liters of diesel with HVO

Through a partnership with Crown Oil, the UK data center firm will replace an initial 45,000 liters of diesel and switch to an HVO provision of more than 750,000 liters when the campus is fully developed.

Synthesized from vegetable oils, HVO is a type of biodiesel where hydrogen is added to the oil. Such ‘green diesels’ create fewer emissions than regular fuel. Crown Oil says 1,000 liters of HVO releases 195kg of C02, compared to 3.6 tonnes for the same amount of regular diesel. 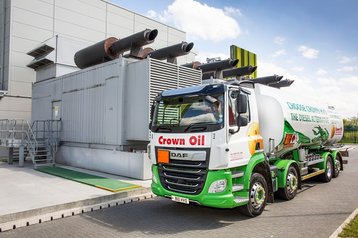 “This pioneering approach to replace our generator’s diesel provision with HVO fuel, is a key step in the company’s efforts to become Net Zero, and a further demonstration of our leadership in the international data center sustainability field,” said Gérard Thibault, Chief Technology Officer at Kao Data. “This move effectively eliminates fossil fuels from our data center operations, and helps us reduce Scope 3 emissions in our customers’ supply chain, while delivering no degradation to the service they receive. Most importantly, it shows how our industry can take a simple and highly beneficial step forward for the good of the environment, ahead of COP26.”

Kao Data says it will eliminate up to 90 percent of net CO2 from its backup generators and significantly reduce nitrogen oxide, particulate matter, and carbon monoxide emissions.

Kao says switching to HVO required no modification to existing infrastructure and can be used as a direct replacement for diesel. The company said HVO has a storage life ten times longer than standard diesel and eliminates microbial growth that can contaminate fuel lines.

“HVO fuel is dramatically better for the environment compared to traditional, mineral diesels. It is 100 percent renewable, biodegradable, sustainable, and non-toxic,” said Simon Lawford, Technical Sales Manager, Crown Oil. “We’re proud to have worked with Kao Data to initiate a first-of-its kind project, which will be transformative for the data center industry, and help point the way forward for significant reductions in industrial greenhouse gas emissions.”