The 125 petaflop high performance computing system will primarily be used by the National Nuclear Security Administration (NNSA) for modeling and simulations as part of the NNSA’s Stockpile Stewardship Program. The current fastest system in the world is the US' Summit supercomputer, followed by China's Sunway Taihulight.

The system will be joined by another, smaller, supercomputer named Lassen, which will focus on unclassified work like cancer drug discovery, research in traumatic brain injury, and studying earthquakes and the climate.

“The next frontier of supercomputing lies in artificial intelligence,” John Kelly, SVP of cognitive solutions and IBM Research, said.

“IBM’s decades-long partnership with LLNL has allowed us to build Sierra from the ground up with the unique design and architecture needed for applying AI to massive data sets. The tremendous insights researchers are seeing will only accelerate high-performance computing for research and business.”

Sierra will be the first NNSA production supercomputer backed by GPU-accelerated architecture, making it the agency's first large-scale heterogeneous system. Earlier this year, in a feature on the ill-fated IBM-Sony-Toshiba Cell chip, distinguished IBM researcher Peter Hofstee told DCD that the the pre-exascale Summit and Sierra supercomputers marked a culmination of a heterogeneous computing vision first attempted by the company back in 2006. 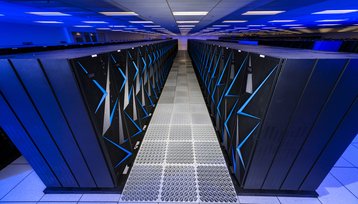 “Sierra is a world-class, pre-exascale supercomputer that allows researchers to run large complex scientific simulations at scale, at speeds never before thought possible,” Ian Buck, VP and GM of Accelerated Computing at Nvidia, said. “Equipped with more than 17,000 of our Tesla Tensor Core V100 GPUs, Sierra is a powerful, universal platform for compute-intensive scientific simulations, machine learning, deep learning and visualization applications all in one - paving the path forward for the future of high-performance computing.”

The supercomputer will be used for nuclear weapons life extension programs, weapons science and nuclear deterrence. “With the advent of Sierra, Livermore has delivered a powerful new tool for NNSA and stockpile stewardship. This machine represents a new approach to high performance computing that will enable us to address and answer scientific questions previously beyond our reach,” LLNL Director Bill Goldstein said.

Mark Anderson, director for the NNSA's Office of Advanced Simulation and Computing and Institutional Research & Development, added: “NNSA and its predecessors have been at the forefront of scientific computing since World War II. The supercomputers provided by NNSA are an essential element of stockpile stewardship without nuclear testing. Sierra is the most capable computer we have ever fielded. It also is a harbinger of future computing technology and a critical step along the path to exascale.”

NNSA expects to reach the exascale in 2023 with the LLNL system El Capitan. It is expected to have about 10 times the performance of Sierra.

“In just a few short years, we expect to see exascale systems deployed at Lawrence Livermore, Argonne and Oak Ridge (national laboratories), ensuring our global superiority in this arena for years and decades to come,” DOE Secretary Rick Perry said.

“Starting with Sierra, this new generation of supercomputers will be an absolute game-changer for the world."