Lithuania has raised close to €6 million ($6.2 million) to purchase a Bayraktar TB2 combat drone and data center for Ukraine.

The fund was initiated by Lithuanian journalist Andrius Tapinas in order to buy weaponry for Ukraine in the Ukraine-Russia war and raised a total of €5,971,842 in three days.

The fund includes €440,000 ($454,000) dedicated to a ‘high tech’ data center in Estonia for the drone system, called Magyla 700. Data from dozens of drones is fed into the system and where it can then be analyzed by command officers, including live feeds from up to 10 drones. 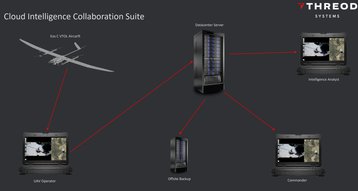 Further details surrounding the size and location of the data center are not disclosed, however posts about the topic frequently mention Threod Systems' Cloud Intelligence Collaboration Suite. Threod is an Estonian UAV company providing hardware and services around intelligence and surveillance applications.

The Ukrainian government has moved much of its data out of government facilities into Poland and the cloud.

The Bayraktar TB2 is a medium-altitude long-endurance (MALE) unmanned combat aerial vehicle (UCAV) which can be remotely operated or flown autonomously.

Produced in Turkey by the company Baykar, the Lithuanian-bought vehicle is named Vanagas (Jastrząb), and on July 2 it was announced that Baykar would, instead, donate the Bakraktar TB2 to Ukraine for free, and the Lithuanian Minister of Defense Arvydas Anusauskas stated that the money would instead be used to buy the necessary ammunition, and support Ukraine in other ways.

The Bayraktar is set to arrive in Ukraine on July 6.