Lumen to sell EMEA business to Colt for $1.8 billion

Lumen is to sell its EMEA operations to Colt.

The communications company announced this week it has entered into an exclusive arrangement for the proposed sale of Lumen's Europe, Middle East, and Africa (EMEA) business to Colt for $1.8 billion. 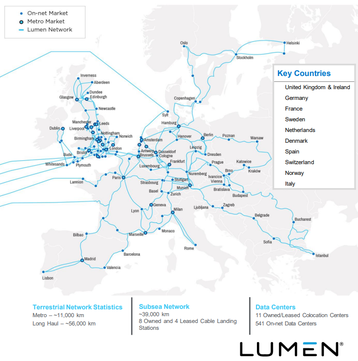 The deal will involve the divestiture by Lumen of its EMEA business, including its terrestrial and subsea networks, data centers, and network equipment in the region to London-headquartered Colt. The deal is set to close as early as late 2023.

"We are continuing to execute on portfolio optimization at Lumen, creating additional value for our shareholders by monetizing non-strategic assets at accretive multiples," said Lumen President and CEO Jeff Storey. "This transaction would enhance our focus so we can invest more efficiently in our most strategic opportunities – our key Enterprise and Quantum Fiber initiatives – and partner with regional leaders like Colt in Europe and Cirion in Latin America to continue serving our multinational enterprise customers."

Lumen’s investor presentation on the deal notes the company has around 66,000km of fiber across Europe spreading from Turkey to Portugal, Scotland, Ireland, Norway, and Finland. Its subsea network consists of 39,000 of cable across the English Channel, Irish Sea, and to the US -- including on Google’s Dunant subsea cable -- as well as eight owned and four leased Cable Landing Stations (CLS). Its data center footprint consists of 11 owned and/or leased facilities and 541 on-net data centers.

"This transaction would mark the next chapter in Colt's exciting story of global growth and world-class innovation," said Keri Gilder, CEO, Colt Technology Services. "We're deeply committed to building extraordinary connections for our people, customers, and partners across our digital infrastructure. This acquisition would strengthen and extend these connections across existing and new geographies, helping us to accelerate growth and bring the power of the digital universe closer to our customers."

Lumen said the transaction would create additional value for its shareholders and further Lumen's strategic focus on “investing in core businesses that are expected to drive long-term, profitable growth”.

‘Most’ of Lumen's EMEA employees are set to join Colt after the transaction closes, and the two companies will establish a ‘strategic relationship’.