The Prince William Board of County Supervisors approved a rezoning and special use permit for a one million square foot data center in Haymarket.

But locals are concerned that the new data center development - as well as two other proposed campuses - could necessitate huge overhead transmission lines that cut through minority communities.

The applicant has said that it would back out of the project if it “triggers the need for construction of new transmission towers carrying overhead bulk electric transmission lines from west of the property.” 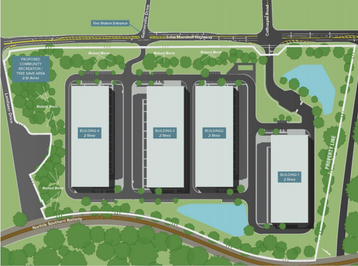 In 2017, when Amazon sought to expand its nearby Haymarket campus, the company said that it would need new power lines to support the data center's growth.

Utility Dominion first sought to build it through the wealthy Somerset Crossing area, but the local homeowners’ association fought back. It transferred its ownership of 55 acres of wetlands which would have been used to the county government. The rules of "eminent domain" only allow state-backed builders to seize private property, to this land could not be seized.

The infrastructure would have gone directly across the site of a three-bedroom house of Nathan Grayson, a descendant of Livinia Blackburn Johnson, a freed slave whose relatives have lived on the land for the past 118 years or more. “Things are running over on top of us,” Grayson told the Washington Post in 2017.

Years of local challenges followed, and thanks to their efforts and increased media scrutiny, the project was ultimately scrapped. Instead, Dominion is developing a more expensive underground transmission system - work that is still ongoing.

Now, communities and politicians are concerned that future data center developments could cause the transmission lines to be reconsidered.

Across from the Village Place Technology Park, two more campuses are set to be proposed - a 23-acre John Marshall Commons Technology Park and a 103-acre I-66 and Route 29 Technology Park. All are outside the Data Center Opportunity Zone Overlay District, where data center uses are allowed by-right and high voltage transmission lines already exist.

“I'm just really struggling with this project because I can't be assured that this project is not going to trigger the use of another [transmission] line specifically in this area,” said Supervisor Jeanine Lawson, R-Brentsville, when debating the project, per the Prince William Times.

Even with Village Park pledging not to go ahead if its project would directly cause a transmission line, it is possible that it might do so indirectly, by maxing out other transmission lines, so that other industries are forced to demand an overhead line.

"The reality is that no developer can commit to where a transmission line will be routed," citizens' group the Coalition to Protect Prince William County said. "That is the sole responsibility of the SCC."

Dominion Energy's manager of electric transmission communications, Greg Mathe, told the planning office that it did not want to build the overhead lines, and thinks that it can meet most of the growing demand by expanding existing infrastructure.

The AWS expansion and Gainesville Crossing (another approved campus) will add around 395MW of new load, with Village Place bringing another 210MW, for a total 605MW.

Village Place is expected to be served by the upcoming Haymarket Transmission Line, a mixture of above-ground and underground cabling. It will also need one to two new substations.

However, the company has not submitted a formal load request, and Dominion has yet to account for the other two proposed campuses, at least publicly.

In his statement, Dominion's Mathe added: "Neither the County nor others should read any absolutes into this letter other than our preference to avoid new transmission into the Haymarket substation, which as noted is based solely on the information we have today."

Of the publicly available information about the Village Park project, we can glean a few facts about the data center, which is expected to be developed by 2024.

The company plans to recycle construction material waste, and use some recycled aggregate materials and steel in construction "where available." It will also use adiabatic cooling.

Once fully built out, it will generate around $3.2 million in annual real estate taxes, assuming assessed values remain constant - according to an economic impact report provided by the company behind the data center. The assessed value of the site is $280.5m.