AT&T, Verizon and T-Mobile have all been busy working to restore networks in affected areas

Network service providers are working to restore cell sites in Florida and South Carolina that were damaged by Hurricane Ian.

The majority of the damage was done to Florida, where the category 4 major hurricane hit last week, before also making landfall in South Carolina. 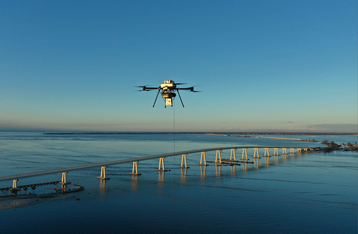 According to Federal Communications Commission’s cell site tracker, there was damage to several counties in Florida, with 444 cell sites reportedly hit by outages, with five more cell sites hit in South Carolina.

The report adds that at its peak on September 29, 17 percent of cell sites in Florida were down during the hurricane, although this number has dropped to six percent, as of October 2.

Most of the sites (260) in Florida were down due to loss of power, notes the FCC, while 173 were down because of backhaul issues. Only 11 sites were damaged due to the hurricane.

Desoto County, Florida, is one of the worst-hit areas, with 38 percent of its cell sites still down as of October 2, while a third (33 percent) of Hardee County's sites were also still reported to be down.

US operators have since responded to the outages, with AT&T and Verizon utilizing satellite and mobile response technology to begin to start fixing service lines.

Yesterday, Verizon deployed Wireless Emergency Communication Centers (WECC) in areas of Southwestern Florida that were impacted by the storm. WECC is generator-powered mobile units that have device charging and computer workstations, along with wireless phones, tablets, and other devices.

The operator has been completing site surveys of impaired cell sites while moving portable generators, and mobile cell towers where needed. It has also deployed drones to provide cell-coverage to responders and residents over for an approximate five to seven-mile radius; the drones can fly for up to 1,000 hours.

AT&T revealed it has supported over 38TBs of network traffic from other carriers since opening its network on September 29 for roaming. The operator has also dispatched 180 of its repair crews across Florida to support the restoration of its services, and deployed 10 Satellite Cell on Light Trucks (SatCoLTs).

The carrier has also confirmed it is extending unlimited talk, text, and data to all postpaid and prepaid customers in some of the most affected Florida counties through Friday, October 7. The counties include Charlotte, Collier, Desoto, Hardee, Hendry, Highlands, Lee, Manatee, and Sarasota.