Nvidia plans "most energy efficient supercomputer ever," will use it to build a digital twin of the Earth

Details are lacking about its Omniverse-themed Earth-2 system

GPU giant Nvidia has pledged to build an energy-efficient supercomputer to simulate the world.

The company did not disclose the architecture, scale, or location of the system - nor did it provide a date for it going live. “It will be incredibly powerful," CEO Jensen Huang said in a media briefing, adding that it would be the most powerful AI supercomputer dedicated to climate change. 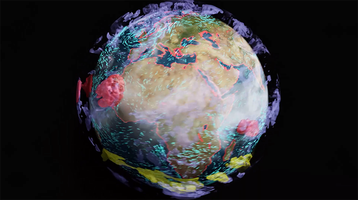 The company announced the Earth-2 supercomputer at its GTC21 virtual conference. “We will build a digital twin to simulate and predict climate change,” Huang said during his keynote.

It will run AI physics defined by the new Nvidia Modulus AI framework, and simulated on the Nvidia Omniverse platform, he said.

“All the technologies we have invented up to this moment are needed to make Earth-2 possible,” he added. “I cannot imagine a greater and more important use.”

Omniverse is the company's branding for 3D simulation, design collaboration, and digital twins. Given Facebook's recent rebrand as Meta, and the rise of the metaverse as an investor-friendly buzzword, Omniverse is now being billed as a "metaverse for engineers."

The new supercomputer will be "designed for Omniverse, because if you imagine Earth as a physical thing, this will be the engine of alternate worlds,” Huang told reporters.

He added that the system will be "the most energy-efficient supercomputer ever created." Depending on the benchmark used, that current title either belongs to the MN-3 - a 1.8 petaflops Japanese supercomputer that tops the Green500 list, or the NREL ESIF HPC data center, which has a PUE of 1.01.

An Nvidia DGX A100 system is second on the Top500 list, while its own in-house DGX SuperPOD is number five.

The company operates the Selene supercomputer in California, and recently opened the Cambridge-1 facility at Kao Data's site in Harlow.

The UK supercomputer is available to select DGX customers in the healthcare space, a first for a company that has traditionally only used supercomputers for internal use.

Earth-2 will also be made available to unspecified researchers and partners.

It is not clear what resolution the Earth will be simulated at, and which parts of the global weather system will be given priority.

Last year, we profiled an ambitious European Union effort to build a digital twin of the Earth, but found that 'Destination Earth' faced an uphill challenge to simulate something at such a vast and complex scale.

“To have this cohesive digital twin of the Earth, I don't see that happening," Professor Michael Grieves, inventor of the first digital twin, told DCD. "I think that is so far out, I just can't conceive. I'm not seeing that anytime this millennium.”