And shows new hardware built by its OEM partners

Meta's data centers have new network hardware built by new OEMs according to open source interfaces published by OCP, the open source hardware body, which Facebook set up ten years ago. The new switches, along with a move to an open application programming interface (API), were announced in an OCP Summit keynote by Omar Baldonado, director of engineering at Meta, delivered at the San Jose Convention Center and online. As with all OCP deliverables, the designs for the switches are shared for potential use by other hyperscale data center providers. 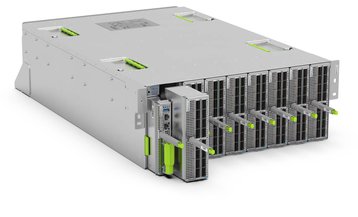 "Open infrastructure technologies and networking hardware will play an important role as we build new technologies for the metaverse, where billions of people will someday come together in virtual spaces," said a Facebook blog detailing the announcement. "As we head toward the next major computing platform with a continued spirit of embracing openness and disaggregation, we’re announcing two new milestones for our data centers: We’re sharing our next-generation network hardware portfolio in our data centers, developed in close partnership with multiple vendors. And in conjunction with this, we’ve migrated our data center network hardware to a standard and open API — the Open Compute Project (OCP) Switch Abstraction Interface (SAI)."

Broadcom and Cisco Systems have provided ASICs for the latest versions of Facebook's top-of-rack (TOR) switches — the Wedge 400 and 400C, which are already in use in Facebook/Meta data centers, offering four times the performance of the existing Wedge 100S systems - upgraded from 3.2Tbps to 12.8Tbpx. The Wedge 400 has a Broadcom Tomahawk 3 ASIC, while the 400C uses Cisco’s Silicon One — the first Facebook switch using Cisco’s new chip. Both switches have higher front panel port density and greater performance, with room for future expansion.

The switches are made by Celestica and can be altered and used by ISPs and other players.

The Facebook (now Meta) network operating system FBOSS has previously used specific APIs according to the ASICs included in the switch. Now, FBOSS has been adapted to use the OCP SAI, which means more silicon vendors can make chips to work in the ecosystem.

"Adapting and migrating FBOSS to SAI means we can onboard multiple ASICS from multiple vendors more quickly and easily onboard new ones in the future. Broadcom has partnered closely on our migration of FBOSS from OpenNSA to SAI," says the announcement. "In addition, we’ve worked with Cisco Systems to support FBOSS with SAI with their ASIC."

Meta's data centers have updated from 100Gbps to 400Gbps fabrics, using the Minipack2 (the latest version of Meta’s modular network switch) and the Arista 7388X5, in partnership with Arista Networks. They are both backward compatible with previous 100G switches and will support upgrades to 400G.

On the tenth anniversary of the foundation of the OCP in 2011, Meta said: "In 2011, as we inched closer toward celebrating one billion people on the Facebook app, we opened our first data center, in Prineville, Oregon. Thanks to the new designs and hardware advancements, Prineville was 38 percent more energy efficient to build than our previous facilities.

"We shared the Prineville data center designs with the public and, along with Andy Bechtolsheim, Goldman Sachs, Intel, and Rackspace, launched the Open Compute Project (OCP) and invited other members to collaborate and build on our progress. Those designs became our first contribution to the OCP. Today, most large data centers have achieved PUE below 1.2."