Microsoft has announced support for ARM based servers in the data center, including them in the latest stage of its Olympus Project open servers, and even porting Windows Azure to run on ARM.

ARM-based chips from Qualcomm and Cavium are in two of Microsoft’s new Olympus “universal motherboard” designs, available as open source, Microsoft’s general manager for Azure hardware Kushagra Vaid told the Open Compute Project’s Summit in Santa Clara today. The company also ported Windows Azure to run on the ARM platform - but only for internal use, rather than for external customers, he said.

“Microsoft has accelerated the timetable for cloud data center ARM processor adoption,” commented Paul Teich, principal analyst at Tirias Research to DCD. “We are still six months before Cavium and Qualcomm deliver these chips to market, and this will get other cloud giants interested. It completely scraps the IDC and Gartner forecasts for ARM servers - and it’s a good move for Microsoft.”

The announcements headed a list of OCP related news, which also included a universal PDU, a clustered GPU system, and containerized network switches. 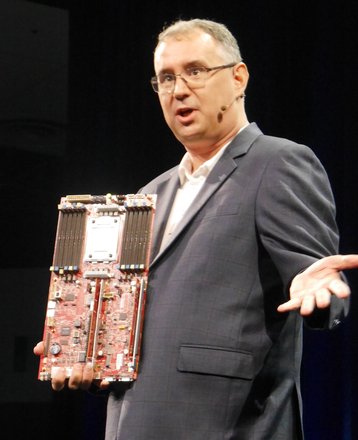 “Our new motherboards are specified to run any workload you can run in the cloud,” said Vaid, before a colleague revealed that the family also includes new processors.

“There’s been a Cambrian explosion of servers,” said Microsoft distinguished engineer Leendert van Doorn, referring to the geological epoch when life forms vastly multiplied. There are many more processor makers than Intel, and a number use the designs provided by ARM, he said, brandishing a one-socket motherboard designed for the Centriq 2400, a 48-core second-generation chip which Qualcomm only announced in December 2016.

Elsewhere at the OCP Summit, Cavium showed a two-socket board. The two chipmakers are just the headline names in a large expansion of the number of companies working with Microsoft on its Olympus project, a collaborative server design, announced at DCD Zettastructure in London last year, which is intended to generate interest in creating more specialized servers for different hardware and applications.

“It’s the first time we have introduced a new chip with a new instruction set in our data center,” van Doorn told the OCP Summit. “Rather than porting everything Microsft has written, we looked at what are the key problems.” Microsoft’s Azure data centers are interested in cloud, storage, search, big data and machine learning, he said.

”We ported Windows Server for Azure,” he said, but told the Summit this was for internal use only. “There is not much demand in the market.”

Despite this, Jason Zander, Microsoft’s Azure vice president told Bloomberg the move would be significant: “It’s not deployed into production yet, but that is the next logical step. This is a significant commitment on behalf of Microsoft. We wouldn’t even bring something to a conference if we didn’t think this was a committed project and something that’s part of our road map.”

The announcement was a big contrast to Facebook’s server refresh which produced a set of standardized designs, which will be mandatory within Facebook, to support the giant’s monolithic applications: “They can have any server as long as one of these,” joked Facebook’s Vijay Rao.

“Microsoft’s strategy is much more flexible,” said Treich. If a customer wants different hardware, Microsoft will be more than happy to deploy it, he said, and Olympus will remove the major obstacle, which is the time taken to develop and deploy the new kit. Microsoft has a hardware abstraction layer and can use any hardware, in theory. 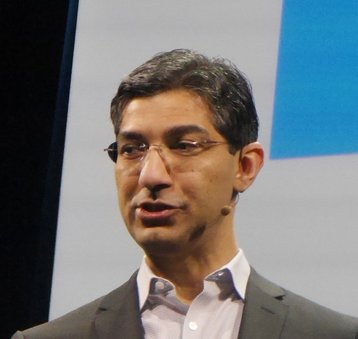 The Olympus project itself has taken more shape, and now include a “universal PDU”, which can be used in any country in the world, thanks to a set of regional adapters that power it.

“When you travel round the world, you don’t take different chargers for your phone, you take an adapter,” said Vaid. “Why can’t we take that concept to data center racks?”

Vaid also announced an impressive GPU computing system: an open source reference design for a chassis which holds eight GPUs, and which can be clustered.

“We have the ability to seamlessly connect up to four chassis with each other using PCI Express, giving 32 GPUs in an extremely configurable form,” he said, ”If you are a machine learning researcher you will be excited to see this innovation coming to OCP.”

Microsoft’s SONIC networking system, announced last year, had an upgrade, so it now deploys software in containers. ”You can now develop on lab machines and port over to the network stack on the switch,” said Vaid. “This will completely change how network applications are designed.”