East London, George, and Paarl will be live by the end of the month

The WIOCC-owned company this week announced the deployment of a further three Edge facilities East London, George, and Paarl will be live by the end of the month. 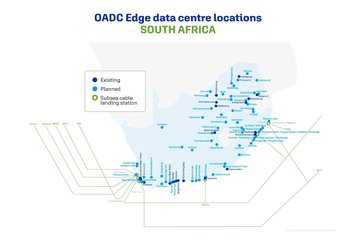 OADC chief executive officer Dr. Ayotunde Coker said: “We are continuing our OADC Edge expansion to more of South Africa’s business hubs to meet the demands of 5G operators, ISPs and fiber operators for support in extending network reach into even more locations. With almost 30 Edge facilities now operational, we are bringing a transformational proposition to the South African market; one that we intend to start rolling out to more countries in the new year.”

In May 2022 the company said it was planning the rollout of “over 100, 0.5MW Edge data centers” by the end of 2022, with 17 of these small Edge locations already live in South Africa, offering colocation, rooftop access, and network interconnectivity between facilities.

The company launched its first 5MW, 2,200 sqm (23,700 sqm) core data center in Durban, South Africa, earlier this year. The company’s second core data center is to open in Lagos, Nigeria later this year and will be the landing point for Google’s Equiano cable, and a third facility in Mogadishu, Somalia, is due to come online ‘before the end of 2022'.