Data center operators will have to be very careful when repairing or replacing cooling systems this summer, thanks to regulations designed to phase out greenhouse gases.

Refrigerants such as fluorinated hydrocarbons (HFCs) with a high global warming potential (GWP) can no longer be used in cooling systems from this year, thanks to the European regulation EU 517/2014. After Brexit, moves to limit greenhouse gases have been passed to the UK authorities, so the ban applies in the UK as well. 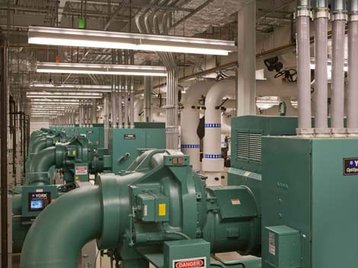 Don't cool your data center by heating the world

During summer, as temperatures soar, data center operators will have to repair or replace cooling systems, points out power and cooling supplier Aggreko. This year, there may be more of this work to do than usual, the supplier warns, as Covid-19 may have disrupted maintenance schedules.

HFCs - fluorinated hydrocarbons - have a GWP thousands of times larger than carbon dioxide. The two main culprits are R410a, used in systems up to a few hundred kW, and R134a, used in larger systems.

In 2015, the European Union passed EU Regulation 517/2014 designed to phase out HFCs by imposing a cap on their production, which has been steadily reduced. Anyone using them in a cooling system has to pay for a quota, and the prices of these have been increasing as the supply reduces.

Internationally, the Kigali protocol was agreed in Rwanda in 2016, and has been adopted by the EU and elsewhere, coming into force in 2019, and imposing a similar phased reduction. Developing countries are expected to being phasedown in 2024.

During the initial stages of the process, the price was increased to reduce use of the gases, and from December, an outright ban on new supplies is in place. Although the UK left the EU at the beginning of 2020, and ended its transition period in December 2020, the UK government has imposed transitional legislation to continue the crackdown

"For European data centers with mechanical cooling systems, this means refurbishment or replacement of aging infrastructure must be compliant with these regulations," warns Aggreko in a release issued this week.

Where possible data centers are opting for free cooling, where outside air is used to cool the racks without the use of chillers. However, as climate change causes temperatures to rise in Europe, many sites will need to switch their mechanical chillers on again - and this may mean they need to source some of the banned HFCs.

“The Met Office has predicted we will see even more instances of heatwaves across Europe this summer, so data center cooling systems are at risk of reaching their limit,” said Nick Osborne, data center specialist at Aggreko.

“If cooling demand exceeds capacity or the cooling system is awaiting repair or replacement within regulation parameters, unexpected and costly downtime is likely to ensue during critical periods. Data center operators must ensure their plans for supplementary cooling for these heatwaves are in place now before the summer begins.”

If sites are operating without mechanical chillers, they may need to hire some on a temporary basis - a service which Aggreko offers - Osborne points out: “With supply chain issues and financial uncertainty being key challenges of the past year, temporary cooling equipment hire could mitigate downtime while permanent infrastructure upgrades are made or free cooling methods are introduced. We are more reliant on data centers than ever, so avoiding cooling failure-related downtime through careful planning is paramount to navigating the summer months.”