4.5MW switched on in the first of five buildings

The mega-scale data center provider announced it had started work on the site in February, and has continued work during the pandemic, formally opening a 4.5MW hall within the first building this week - capacity which is already fully leased to an un-named cloud software provider. 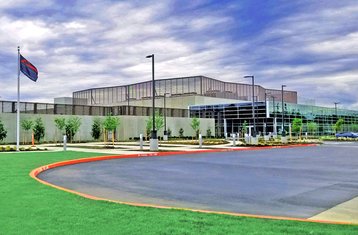 The campus is woven into a "rich tapestry" of networking, according to the QTS release, and customers will get "abundant networking on day one," said QTS, including carrier-neutral cloud interconnection, multiple fiber routes and IP providers, and multiple dark and lit fiber providers. The local fiber infrastructure, the Hillsboro Ring, connects 14 data centers and offers low cost dark fiber access to trans-Pacific cable systems.

"The only location all of these networks are available to peer with each other is the QTS Hillsboro NAP," says the QTS release. The QTS Hillsboro Network Access Point (NAP) is in the new facility, while other QTS facilities hold NAPs for Richmond and New Jersey.

The first QTS Hillsboro building is a 158,000 square foot, 24MW data center, but QTS has plans for the construction of five mega data centers making up more than one million square feet of data center capacity and more than 250MW of power capacity.

QTS has said customers in the new facility will be able to have 100 percent renewable energy. The company has two data centers, in Chicago and Piscataway New Jersey, which are powered by renewable energy, thanks to power purchase agreements (PPAs).

Local civic leaders welcomed the opening: “We are proud to welcome QTS to Hillsboro at a time when it’s essential that we work to keep our economy moving forward,” said Hillsboro Mayor Steve Callaway.

“This is a tremendous match: QTS is known as a leading software-defined data center, and the City of Hillsboro is known as a global hub for innovation and technology,” said Dan Dias, Hillsboro Economic and Community Development Director.