President Donald Trump is reportedly fixated with Amazon and its founder and CEO, Jeff Bezos, and is intent on causing the company financial distress.

Among options thought to be considered by the US President is a potential attempt to stop a major Pentagon cloud contract, worth up to $10bn over 10 years, from going to Amazon Web Services, the e-commerce giant’s cloud computing division.

Trump’s displeasure with Amazon is thought to stem from Jeff Bezos’ ownership of The Washington Post, a publication which has often been critical of the current White House administration.

The spat worth billions 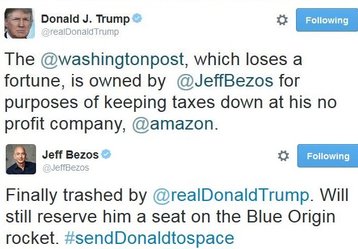 Trump’s views on Amazon have been documented multiple times, and in March, Axios reported on five sources who claimed the President was “obsessed with Amazon.”

After the article was published, shares in Amazon fell some six percent. The President then tweeted: “I have stated my concerns with Amazon long before the Election. Unlike others, they pay little or no taxes to state & local governments, use our Postal System as their Delivery Boy (causing tremendous loss to the U.S.), and are putting many thousands of retailers out of business!”

Two days later, he continued: “While we are on the subject, it is reported that the U.S. Post Office will lose $1.50 on average for each package it delivers for Amazon. That amounts to Billions of Dollars. The Failing N.Y. Times reports that “the size of the company’s lobbying staff has ballooned,” and that does not include the Fake Washington Post, which is used as a “lobbyist” and should so  REGISTER. If the P.O. “increased its parcel rates, Amazon’s shipping costs would rise by $2.6 Billion.” This Post Office scam must stop. Amazon must pay real costs (and taxes) now!”

This month, he added: “I am right about Amazon costing the United States Post Office massive amounts of money for being their Delivery Boy. Amazon should pay these costs (plus) and not have them bourne by the American Taxpayer. Many billions of dollars. P.O. leaders don’t have a clue (or do they?)!”

Amazon has invested in its own shipping infrastructure, and Trump’s comments are factually incorrect: USPS is legally required to not ship at a loss, Amazon pays the same bulk rate as everyone else, and the success of the company has led to revenue growth at the post office.

Axios quoted a source: “The whole post office thing, that’s very much a perception he has. It’s been explained to him in multiple meetings that his perception is inaccurate and that the post office actually makes a ton of money from Amazon.”

One of the people tasked with explaining the nuances of shipping to the President was his chief economic advisor, Gary Cohn, who later resigned over Trump’s tariff plan. “Trump doesn’t have Gary Cohn breathing down his neck saying you can’t do the Post Office sh*t,” a Republican close to the White House told Vanity Fair. “He really wants the Post Office deal renegotiated. He thinks Amazon’s getting a huge f**king deal on shipping.”

Sources told the publication that Trump was looking to escalate this feud. One source added: “He gets obsessed with something, and now he’s obsessed with Bezos. Trump is like, how can I f**k with him?”

One option would be to encourage Republican states to open investigations into Amazon’s business practices, while another would be to target the company’s government cloud contracts.

Vanity Fair claimed advisers are encouraging Trump to cancel Amazon’s potential major cloud contract with the Pentagon. The Joint Enterprise Defense Infrastructure (JEDI) contract could be worth as much as $10 billion over a decade, and is currently set to be awarded to just one company - with many believing that Amazon Web Services, the market leader and cloud provider to the CIA, is the apparent winner.

Trump is not the only party that has a problem with JEDI. After lobbying from Microsoft, IBM and industry groups representing companies such as Oracle, Congress has asked the Department of Defense to clarify why the contract will be awarded to a single provider. A Congressional report said: “There are concerns about the proposed duration of a single contract, questions about the best value for the taxpayer, and how to ensure the highest security is maintained.”

Sam Gordy, GM of IBM US Federal, said in a statement: “There’s a reason why the government engages with multiple sources for acquiring fighter jets or launching satellites: national security.”

“It doesn’t make sense for DOD to opt for a less secure approach for purchasing cloud computing than it would for any other weapon system.” 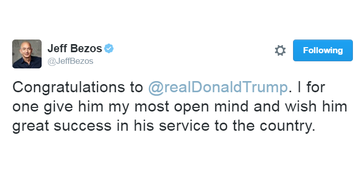 After Jeff Bezos acquired The Washington Post in 2013 for $250 million in his own personal funds, the newspaper’s editors have repeatedly denied that the billionaire has control or influence over the paper’s coverage.

But one former White House official told Vanity Fair that Trump looks at the Post the same way as the National Enquirer. “When Bezos says he has no involvement, Trump doesn’t believe him. His experience is with the David Peckers of the world.

“Whether it’s right or wrong, he knows it can be done.”

With threats against its business growing, and an eye to further expansion and acquisitions, Amazon has increased its actual lobbyist spend.

Last year, it expanded its lobbying staff from 60 to 83, outspending giants like Exxon and Walmart.