Who knew that quantum hardware could be so beautiful

The startup is working on ‘true’ quantum computers that require a vacuum and close to absolute zero temperatures - similar to the machines built by Google and IBM - rather than less sensitive systems based on the ‘quantum annealing’ principle sold by its equally well-funded rival, D-Wave.

“This round of financing brings us one step closer to delivering quantum advantage to the market,” said physicist Chad Rigetti, founder and CEO of the company. 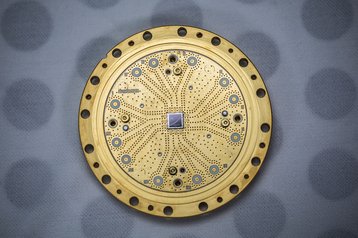 Rigetti was established in 2013 to commercialize quantum computing technologies, both hardware and developer software. In order to achieve this, the startup built Fab-1, the world’s first dedicated quantum chip foundry.

Today, it is focused on making practical “quantum-classical computing systems” that would use its quantum chips to accelerate specific tasks - like complex scheduling problems.

In February 2019, Rigetti launched a quantum computing cloud, housed in its specialized data center, and in December it unveiled a 32-qubit chip available through both the Rigetti Quantum Cloud Services platform and Amazon Bracket - a fully managed quantum service from AWS.

The company’s aim to demonstrate quantum advantage is no empty boast – it received an up to $8.6 million grant from DARPA, to be spent on a quantum system capable of outperforming classical computers. On this project, the company is collaborating with the NASA Quantum Artificial Intelligence Laboratory (QuAIL) and Universities Space Research Association (USRA).

“Quantum technology has the potential to unlock significant advancements in biology, chemistry, logistics and material science, and we believe that Rigetti provides the most immediate and clear path to a production-grade system in the market,” said Tomer Diari, an investor at Bessemer Venture Partners who joined the company’s board.