Rostelecom has launched commercial operations of a new center in Murmansk, Russia. 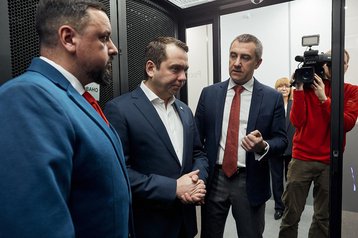 The company said the new facility is the company's first built in the Arctic zone of Russia; Murmansk city is located in Murmansk Oblast, in the far northwest part of the country close to Finland.

First announced last year, the government of the Murmansk region is the anchor customer of the project. The company is aiming to target both local authorities and businesses; the current capacity of the regional data center is 20 racks, with potential to expand if required.

Alexander Loginov, Vice President - Director of the North-West branch of Rostelecom, said: “In the context of active digitalization, the amount of data used is steadily increasing, the requirements for the speed and quality of their processing are also growing. And here the geographic proximity of information to the end user, which is ensured by the new data processing center of Rostelecom, is of great importance. The constructed facility meets all high quality and reliability standards, we guarantee them as the undisputed leader in the data center services market in Russia.”

The facility is reportedly the first in the Russian Arctic, with the company will invest around 300 million rubles ($4.2m) in the project.

Andrey Chibis, Governor of the Murmansk Region, added: “The emerging infrastructure creates a solid basis for the high pace of digital development of the Murmansk region. I am sure that the appearance of a data center in the Kola Arctic will become one of the important drivers for the development of the entire Arctic zone of the country. Both commercial and government structures need reliable storage and convenient access to information arrays.”

In June Rostelecom said it had suspended the development of a number of data centers due to a lack of access to equipment. The partially state-owned telecoms and colocations provider said that it could no longer build facilities in Russia's western 'Central Federal District' due to parts issues.

The company was instead focusing on using its available equipment to finish projects that are near completion, including in Moscow and St. Petersburg. Although since then the company announced plans for a backup data center for the local government of Yekaterinburg.

Earlier this week Rostelecom met with Armenian officials to discuss expanding its infrastructure footprint in the country.

Sanctions imposed on Russia in the wake of its invasion of Ukraine have impacted the country’s data center industry. The country faces a shortage of IT hardware as well as an exodus of IT workers. Rostelecom has an even harder job getting equipment than most Russian data center firms as it is also sanctioned by the US and UK governments, while the EU has sanctioned the company's president.

Over the summer, several local operators said they are or would consider building facilities outside the country – yet continue serving Russian companies – in order to avoid supply chain issues.