Prefabricated system with immersion built in - PUE of 1.03 promised

The single-rack EcoStruxure modular data center comes in a 20ft ISO shipping container and supports up to 60kW as standard. This can be expanded to 336kW as a customized option. Schneider promises it will have a PUE (power usage effectiveness) of less than 1.15 - and says it could go as low as 1.03. 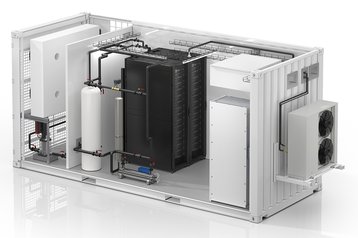 The new unit in Schneider's EcoStruxure modular range will accommodate the most CPU and GPU-intensive high performance computing (HPC) Edge applications, and can be placed in harsh and remote environments, outside of data centers, or even out of doors. Schneider says it's aimed at industrial manufacturing and automotive sites, as well as telco, military, mining, and oil and gas applications.

The container is sealed to maintain temperature and humidity. It also keeps out dust and potential intruders. It is integrated by Avnet and also supports remote monitoring and management with Schneider's EcoStruxure IT software.

Schneider lists the usual liquid cooling benefits: it removes the need for fans and other air handling equipment, cutting energy use and improving reliability, while reducing maintenance. While it adds the requirement to look after a liquid circulation system, it does give the IT people several fewer electro-mechanical devices to worry about, which would have needed regular upgrades and replacement.

“Today, demand for the most powerful CPUs and GPUs has risen in practically every IT application, while at the same time, competition for space has quickly become acute,” said Robert Bunger, program director, CTO Office, Schneider Electric.

“The new all-in-one liquid-cooled prefabricated data center module meets the need to deploy compute-intensive processing power in a compact, secure and dedicated edge environment, which can be deployed almost anywhere in as little as six weeks.”

Schneider Electric announced the Iceotope-based liquid-cooled rack in late 2019. Since then it has been expanding its modular Edge products, for instance bringing rugged R-series units to Europe, an launching a 43U office-friendly unit in May this year.