Multi-site management for staff and maintenance in the hyperscale world

Aveva, the systems management company which Schneider took over in 2015, has put together a package for managing hyperscale data centers.

The package, which unites Aveva Unified Operations Center with Schneider Electric’s EcoStruxure, includes predictive maintenance, staff training and financial aspects of large data centers. Aveva is already working with customers, but can't say who they are. 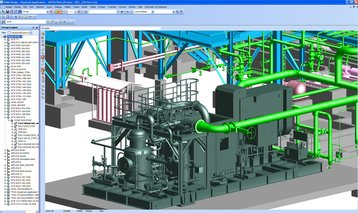 "Aveva has expertise in software for operations, engineering and performance, for multiple domains beside data centers," Rashesh Mody, Aveva's vice president of monitoring and control told DCD.. "We are now expanding our space into energy and data centers, and Schneider Electric will provide the domain expertise to bring all these pieces into the data center market."

Aveva began in 1967 as part of a government-funded Computer-Aided Design Centre at the University of Cambridge, and develops specialist software for oil and gas industry, shipping, warehousing, manufacturing and energy management. In 2015, Schneider Electric took a 53 percent stake in the company, aiming to take it to new sectors, but leaving it with a separate stock market listing and its own CEO, Richard Longdon, since replaced by former IBMer Craig Hayman.

Since merging with Schneider, Aveva has been more or less independent but has been working with a few Schneider customers to get the new portfolio aligned - but things have sped up lately, said Mody: "In this Covid-19 situation there is a lot of focus on data. Everything is going so fast." He added: "It was already picking up steam - in the last six to nine months things have gone so rapidly."

The software is hardware neutral, so it can integrate equipment from other vendors besides Schneider's, he said, but Schneider will front end it for sales and support: "For hyperscale, we have put our team behind Schneider."

Aveva does have some data center experience, Mody added, but it has been mainly opportunistic deals with smaller individual data centers The new hyperscale program will appear first in , two major projects, in APAC and North America, but Mody could not name say the hyperscaler(s) involved.

The features in Aveva's software include predictive analytics and learning, which can receive data from related modules in Schneider's EcoStruxure.