The Luxembourg-based company announced it had become a medium Earth orbit (MEO) connectivity partner for Microsoft Azure Orbital last year and said at the time Microsoft’s Phoenix, Arizona, and Quincy, Washington campuses would host ground stations, but hasn’t yet said where the other two will be hosted.

Construction on the ground stations has already begun and are due to enter operations in the second half of this year. The eight sites will provide telemetry, tracking, and control capabilities to manage the new O3b mPOWER broadband satellite constellation. 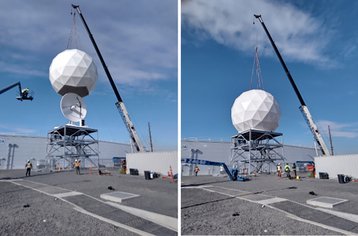 SES says the new ground stations use 5.5-meter carbon fiber antennas which can be installed without the need for photogrammetry, and will utilize energy-efficient solid-state power amplifiers, and a low electrical load for the antenna control unit (ACU).

“We are thrilled to have chosen these eight locations and construction is underway,” Stewart Sanders, EVP of Technology and O3b mPOWER program manager at SES.

The first three O3b mPOWER satellites are scheduled for launch in Q3 2021, with three more due in Q1 2022, with service delivery expected to begin in Q3 of 2022.

“Some of the gateways are colocated with Microsoft data centers to give direct access to major points of presence,” Sanders told Capacity. “That will give an almost cloud-like experience. The Microsoft relationship is the most important one, but it’s not exclusive.”