In a study the results of which will surprise absolutely no one, Synergy Research has found the metro areas around San Francisco and Washington DC are currently the highest growth colocation markets in the US.

The New York metro is currently the world’s largest market for colocation, but Silicon Valley is growing at twice the speed of the national market.

Equinix in the lead

According to Synergy, Equinix is the market leader in four out of six major US metros and would also have been the leader in New York, if it wasn’t for Digital Realty’s recently concluded acquisition of Telx. Digital Realty also the largest colocation provider in Dallas.

“While colocation is an increasingly global market, in many ways it is also a highly localized service that is dependent on having access to specialized data center facilities that are close to the target client base. It is this combination of global and local factors that is now driving consolidation and M&A activities in the colocation industry,” commented John Dinsdale, chief analyst and research director at Synergy. 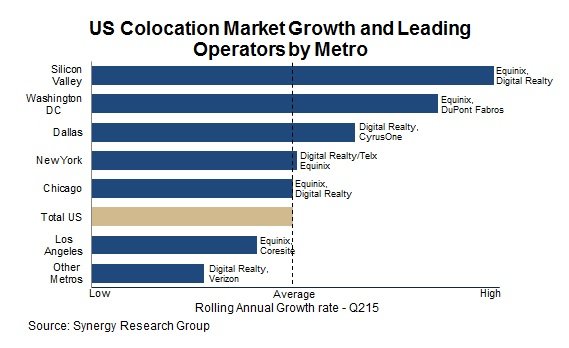