Starlink is now serving satellite communications to researchers in Antarctica.

“NSF-supported USAP scientists in Antarctica are over the moon! Starlink is testing polar service with a newly deployed user terminal at McMurdo Station, increasing bandwidth and connectivity for science support,” the US National Science Foundation tweeted this week. 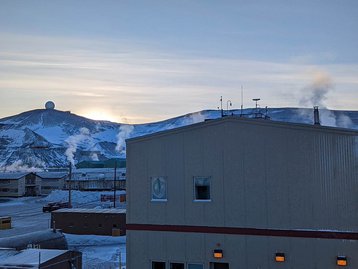 “Starlink is now on all seven continents! In such a remote location like Antarctica, this capability is enabled by Starlink's space laser network,” SpaceX tweeted in reply.

Antarctica is the last remaining continent without a subsea fiber cable, with research stations across the region entirely reliant on satellite communications. The US McMurdo Antarctic station, located on Ross Island, has around 25Mbps to share between up to 1,000 people in the Austral summer. The South Pole is entirely reliant on communications from three aging satellites.

However, a number of parties are exploring the possibility of building a cable to Antarctica to support research missions.

Starlink this month also signed a new distribution deal with Speedcast. The US communications firm will offer Starlink’s satellite-based connectivity to its enterprise and maritime customers.

“Starlink is an exciting new communications pathway for customers, offering significant diversity and added capacity at a time when remote sites continue to push to the farthest ends of the Earth and when bandwidth demand is ever increasing,” said Joe Spytek, chief executive officer at Speedcast. “As a trusted, agnostic integrator of next-generation technologies for customers, we’re excited to add Starlink to our toolkit to make ubiquitous connectivity a reality for remote operations around the world.”

Where OneWeb has signed dozens of wholesale agreements, it is only in recent months that Starlink has begun making a signification number of distribution deals. It recently signed a deal with T-Mobile to provide mobile signal connectivity from space, via its Starlink satellites to remote areas across the US, alongside deals with the US Air Force, Royal Caribbean, Hawaiian Airlines, and private plane provider JSX.

In other space news:

- A fireball in the sky over Scotland this week was likely a Starlink satellite de-orbiting, according to the Guardian.

- Iridium will launch five of its remaining six ground spare satellites on a SpaceX Falcon 9 rideshare mission in 2023. SpaceNews reports the company was looking for a cost-effective opportunity to launch the satellites rather than continue to pay to keep them in storage in a facility in Arizona.

“We have always said that when the right opportunity presented itself, we would launch many, if not all, of our remaining ground spares, and just such an opportunity came about,” Matt Desch, chief executive of Iridium, said in a statement announcing the launch. “Our constellation is incredibly healthy; however, the spare satellites have no utility to us on the ground.”

- Foxconn is developing its own Low Earth Orbit satellite and could launch next year, though details are sparse.

- AST SpaceMobile, a company looking to create direct-to-mobile satellite communications, successfully launched its BlueWalker 3 prototype satellite this week. The machine is likely to unfurl its antenna next week, and begin testing operations in the weeks that follow.

"BlueWalker 3 is on course and securely circling the earth," said Scott Wisniewski, chief strategy officer of AST SpaceMobile. "The satellite is thermally stable and communicating directly with ground stations. Our team is now operating from three global mission control centers, including Maryland, Colorado and Australia, where we are directly receiving data from BlueWalker 3."

- OneWeb has signed a new launch agreement with Arianespace after its previous agreement was impacted by Russia’s invasion of Ukraine and the subsequent political fallout. Arianespace is supporting OneWeb on its upcoming launches, including the performance of dispenser supply services for two launches to be performed by NewSpace India Limited; OneWeb and Airanespace will also examine future opportunities together, especially on the Ariane 6 launch vehicle for the second generation of the smallsat constellation.

- ZTE, China Mobile, and the China Transport Telecommunications and Information Group have conducted a field trial of 5G Non-Terrestrial Network (NTN) technology. The trials demonstrated services such as short messages and voice services between a handset and satellite.