The Prime Minister of Saint Kitts and Nevis has said the country will build a new data center.

In his speech to the sixth National Convention of the People’s Labour Party (PLP) this week, Timothy Harris, Prime Minister of Saint Kitts and Nevis, outlined several ideas to improve the economic situation for the people of the twin-island nation, and support further development. 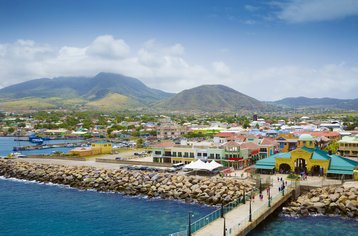 Saint Kitts and Nevis are two small neighboring islands between the Atlantic Ocean and the Caribbean Sea to the east of Puerto Rico. The land area of larger Saint Kitts is about 168 skm (65 sq mi); approximately 29 km (18 mi) long and on average about 8 km (5 mi) across. The combined population is less than 40,000.

The island has at least one data center; the Government Information and Communication Technology Center at C A Paul Southwell Industrial Park in the capital Basseterre. It has been upgraded at least twice – once in 2007 and again in 2015 after being damaged in a storm in 2012 – with help from the Embassy of Taiwan.

Basseterre is also the landing point for three cables: the Eastern Caribbean Fiber System (ECFS) system, launched in 1995; the Saba, Statia Cable System (SSCS) to Anguilla installed in 2013 and owned by the Dutch Government; and Digicel’s South Caribbean fiber running from Puerto Rico to Trinidad and Tobago from 2006.

Harris said the expansion of the digital economy remains a priority of the Government, noting that this will create “new jobs and improved opportunities for our people to work away from home. We will target high-tech industries for St. Kitts and Nevis and we will build out a state-of-the-art data center here bringing much big business to St. Kitts and Nevis.”

Further details weren’t shared, and DCD has reached out to the SKN Government news services for more information.

Prime Minister Harris also outlined plans to build out the country’s alternative energy program to help it deal with the issue of the high cost of fuel and energy. He also aims to expand the blue economy – the sustainable use of the ocean to support the economy.