The floating PV system will be built on Duriangkang Reservoir in the south of Batam Island, originally a saltwater bay. A dam built in the inlet more than two decades ago had transformed it into a huge reservoir over an area of around 23 sq km.

With an estimated 101.2-million cubic meters of water, the Duriangkang Reservoir supports more than half of the fresh water supply to Batam Island. 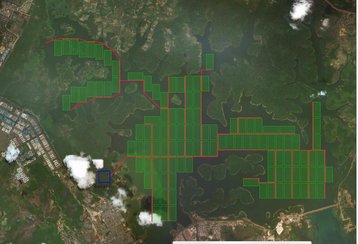 The proposed solar farm that Sunseap will build in Batam, Indonesia – Sunseap Group

The construction of the PV system will include an energy storage system (ESS) with a mammoth storage capacity of more than 4,000 MWhr and will cost an estimated US$2 billion.

When completed, the system will have a projected capacity of 2.2 GWp and span 1,600 hectares, making it the largest floating PV system in the world. Sunseap expects the solar farm to generate more than 2,600 GWh of electricity annually, potentially offsetting more than 1.8 million metric tons of carbon per year.

According to Sunseap, the energy generated and stored will supply non-intermittent solar energy around-the-clock. A portion of the green energy will be consumed within Batam while the balance can potentially be exported to Singapore, located just 50 kilometers away via a subsea power cable.

That's is slightly less than twice the width of Singapore, which at its maximum has a width of 26km. Singapore had also previously announced plans to import 100MW of electricity from neighboring Malaysia over two years as part of a trial.

“This investment by Sunseap will be a timely boost for Batam's industries as they seek to reduce the carbon footprint of their operations. At the same time, it will create jobs and transfer skills to Batam's clean energy sector,” said Muhammad Rudi, the chairman of BP Batam.

The last official figures back in 2014 revealed that data centers already made up seven percent of Singapore’s electricity consumption, and the sector has grown considerably since. Facing power and land constraints, the country is currently in the midst of a data center moratorium.