Europe's only NAND manufacturer gets into data centers

The two companies aim to produce solid state drives (SSDs) that are specifically adapted to data center applications such as Big Data, video streaming, and machine learning - an extension of the Swiss storage firm's approach of providing customized products for specific demanding applications 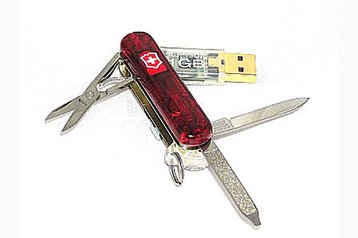 "So far, we've focused on industrial automation and SSDs for the big networking vendors," said Thomas Wellinger, head of product management at Swissbit. "Now, we're entering the data center market and will soon launch an SSD that can be tailored to specific workloads."

Previously, Swissbit has covered the communications, industry, and automotive markets, and is perhaps best known to many for its Swiss army knife with USB storage, produced in the early 2000s.

The idea is to move SSDs on from a paradigm where they mimic the performance of hard disk drives (HDDs), says Swissbit's announcement. "SSDs that are based on standard HDD concepts have not been designed for complex workloads. As a result, issues such as a rapid degradation in performance after a short time or early life failures arise."

Swissbit says that together with Burlywood, it will develop SSDs designed to keep consistent high performance in specific data center applications and work profiles, for the whole life of the SSD.

The partnership will lean on Burlywood's proprietary flash storage architecture that analyzes application behavior at the flash controller level and tunes SSD performance to match the application.

"With Burlywood, we have found a partner who knows both the SSD market and the real requirements of data center applications in detail. With this knowledge, we have jointly developed a unique solution approach that can sustainably increase the profitability and performance of data centers," said Matthias Poppel, chief sales and marketing officer at Swissbit.

The company's first SSD specifically developed and optimized for data centers will be introduced soon.