So the hotel can use the waste heat

New Zealand based T4 Group has revealed that the Tier IV data center it is planning in New Zealand's South Island will be placed at a hotel in Invercargill, which will use the facility's waste heat.

T4 announced it was building a $30 million (NZ$50m) data center in South Island in March, and has now confirmed that the facility will be on land north of the Ascot Park Hotel off Racecourse Road in Invercargill, according to the Otago Times. 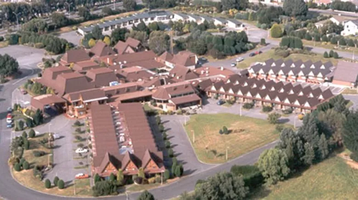 The location will allow the data center to turn its waste heat into an asset, by pumping it to the hotel allowing the hotel to burn less coal for heating.

T4 Group director David Simpson told the Otago Times: ""It is wonderful to have the site here in Invercargill. We are looking into options to utilise the heat created by the data centre to heat the Ascot Park Hotel, reducing the need for coal and making both buildings very efficient and sustainable."

However, the details are still being worked out, according to Chris Ramsay, CEO of Invercargill Licensing Trust (ILT) which owns and manages the hotel.

"It is very exciting; the T4 Group and ILT have been working together for a number of months now to understand how it could work," said Ramsay. "One of the main benefits is that we could create a fair bit of energy efficiency for the hotel and the infrastructure, the pipeworks are largely in place."

The modular data center will be built in stages beginning later this year, said Simpson.

“Currently, data centers in New Zealand rely heavily on coal as a secondary power source which companies offset by purchasing carbon credits," said Simpson at that time. "We can harness the unique benefits from the regions, such as access to hydro energy, to develop a truly green and sustainable community asset."

At the launch, Simpson said the data center had been placed specifically to enable waste heat reuse: “We are looking to try and recycle off our outputs, such as heat, where we can. That’s part of why the particular location that we’ve picked is specific, so the partner there has the ability to use the heat.” said Simpson in March.

Most data centers in New Zealand are located on the North Island. However, DataGrid has bought a 43-hectare site in North Makarewa near Invercargill and is currently calling for expressions of interest from construction firms to build a data center there.

This facility will also draw energy from the Manapouri hydropower scheme, which is due to have a large surplus once the Rio Tinto aluminum smelting facility at Tiwai Point closes in 2024.