But the whole budget has to go through Congress, and will likely see a lot of changes

In the White House’s FY 2019 budget request, $636 million in funding has been set aside for the Department of Energy’s Exascale Computing Project - $376m more than FY17.

The project aims to build the nation’s first exascale supercomputers (a billion billion floating-point math calculations per second), a goal the US is locked in a tight race with China to reach first. The budget proposal must, however, be approved by Congress, and then that new version must be signed by the President. 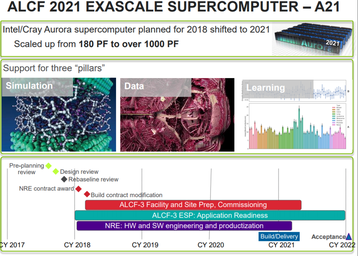 Of the $636m in proposed spending, $473m would go to the DOE’s Office of Science and $163m to the National Nuclear Security Administration (NNSA).

Of the NNSA’s funds, $24m would go to the Exascale Class Computer Cooling Equipment (EC3E) project at Los Alamos National Laboratory (LANL), and $23m to the Exascale Computing Facility Modernization (ECFM) project at Lawrence Livermore National Laboratory (LLNL). The ECFM upgrade hopes to prepare the laboratory for its first exascale system, El Capitan, which is tentatively set for 2023.

Elsewhere, the budget requests $105m for quantum computing research “to address the emerging urgency of building US competency and competitiveness in the developing area of quantum information science, including quantum computing and quantum sensor technology.”

The overall DOE budget request is $30.6 billion, a $500m increase over current levels. That includes a $1.2bn increase for the National Nuclear Security Administration to modernize the US’ nuclear weapons arsenal.

The Advanced Research Projects Agency-Energy (ARPA-E) program, however, faces significant cuts - with its $305m budget dropped to zero. The Office of Energy Efficiency and Renewable Energy could have its budget cut from around $2bn to $696m.