UK to send communications satellite to the Moon

A UK satellite technology firm has got the green light to send a data-relay spacecraft to the moon to help NASA, ESA and other space agencies communicate with future lunar missions.

Surrey Satellite Technology Ltd (SSTL) aims to launch the craft in 2022, to take part in an expected surge in missions to the Moon this decade. The UK government has confirmed a £274 million ($353m) annual investment with the European Space Agency (ESA) at a meeting in Seville earlier in February. 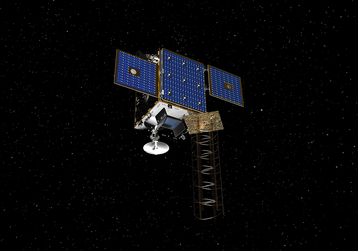 Manned and robotic lunar missions have traditionally used their own communications services, but as lunar exploration looks like ramping up, SSTL intends to offer a commercial service to agencies including ESA and NASA, whose Artemis program plans to send astronauts to the Moon for the first time since the 1970s. In particular, Lunar Pathfinder plans to aid communications from the Moon's polar regions and the otherwise-inaccessible dark side.

“Lunar Pathfinder will be the first commercial service to address the need for data relay around the Moon, and will not only demonstrate an innovative business idea, but we fully expect it to also stimulate the emerging Lunar market," said Phil Brownnett, SSTL’s managing director. "By pioneering a commercial solution and service delivery model in lunar orbit, SSTL and ESA are opening the door to providing services to the solar system, and contributing to the scientific progress of deep space exploration.”

The 280kg lunar spacecraft will communicate with systems in lunar orbit or on the surface using low-power S-band and UHF links, and relay communications back to Earth using long-distance X-band microwaves. If it is established before the Artemis program heads to the lunar South Pole in 2024, it could provide NASA with a reliable and cost-effective communications route and a higher bandwidth than the alternative of bringing its own relay spacecraft.

The Lunar Pathfinder will sit in a stable elliptical orbit with visibility of the Southern Lunar Hemisphere each day, to give the best opportunities for the transmission and reception of data between Earth and the Moon. It will be able to communicate to multiple Earth-based ground stations, including the Goonhilly Earth Station in Cornwall, UK.

"For small missions, in particular, the key barriers are still affordable access to lunar and deep space orbits and communications back to Earth. SSTL and Goonhilly Earth Station have jointly proposed a set of Commercial Lunar Mission Support Services (CLMSS) that, in the frame of a partnership with ESA, infrastructure to support the exploration of the Moon, and ultimately the sustainable development of a Lunar economy." says SSTL's brochure for the Lunar Pathfinder.

“This decade we will see humans and robots visit uncharted territory and return with new discoveries, communications is key to send scientific and operational data to Earth,” said David Parker, ESA’s director of human and robotic exploration. “We are returning to the Moon with commercial and international partners, and the Lunar Pathfinder mission will be an integral part.”

A lot of future lunar exploration will focus on the Aitken Basin, a giant impact crater on the far side of the moon which was discovered by lunar orbiters in the 1960s, and physically explored for the first time by the Chinese Chang'e-4 spacecraft and rover in 2019.

The lunar crust is very thin in the Basin, and it is believed to contain billions of tons of water, essential for the prospects of permanent lunar settlements.

Beyond Lunar Pathfinder, SSTL is developing plans for a constellation of communications spacecraft orbiting the Moon, which could extend to navigation services similar to terrestrial GPS.