Urban Electric Power has made its first delivery of rechargeable alkaline batteries to Europe, and won a place in an Amazon Web Services clean energy startup program.

UEP, whose batteries made their first appearance in data centers at the University of California San Diego's Supercomputer Center last month, has supplied a 20 kilowatt-hour (kWh) battery energy storage system to the zinc oxide factory in Eijsden, Netherlands belonging to its partner EverZinc. The batteries have been installed by Belgian energy services company Enersol. 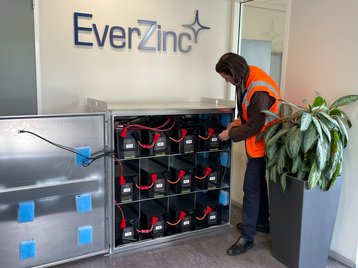 The batteries will partner with a 6kW solar power system, storing excess power till needed.

UEP's rechargeable alkaline batteries are a development of the zinc manganese-dioxide chemistry used in household AA batteries, altered to make batteries that are rechargeable for 10 years or more. The battery technology aims to become competitive with the lithium-ion batteries that have been widely used in electric vehicles and portable devices. IT does not suffer from a risk of thermal runaway which has caused incidents such as the lithium battery fire in Chandler Arizona last month, and UEP says it will be cheaper than its lithium rival.

“This is our first European installation, and one of several high-profile installations we’ll be announcing in the coming months,” said Sanjoy Banerjee, who developed the rechargeable alkaline batteries at City College of New York, and is now CEO of UEP. “Supporting solar power is one of many applications for which our products are cleaner, safer, and more affordable than other available technologies.”

EverZinc is a partner of UEP, providing the company with zinc oxide for its batteries - and is adopting those batteries to reduce emissions in its buildings, where they will be married up with solar panels. The program was presented at EverZinc's R-Zinc event in Brussels this week.

“The installation of a battery energy storage system in one of our plants demonstrates EverZinc’s commitment to accelerate the adoption of zinc-based technologies,” said Vincent Dujardin, CEO of EverZinc. “Furthermore, this project is fully aligned with our vision to reduce the carbon footprint of the zinc materials produced in our premises in the coming years.”

UEP makes the batteries at a factory in Pearl River, New York. They don't use lithium, lead, or cadmium, which are elements that variously have issues with supply, pollution, or flammability. The UEP zinc manganese-dioxide cell meets UL 9540A standards, which enabled the San Diego Supercomputing Center to install a 1,000kWh of capacity indoors without expensive fire suppression systems.