The United States Army has broken ground on the infrastructure project that aims to unify its cyber operations, capability development, training and education at a single location.

The first phase of the US Army Cyber Center of Excellence and Fort Gordon will open in May 2018, while the second phase, supporting Cyber Protection Team operations, will be finished in early 2019. The entire project is expected to be finished in 2020.

Once complete, the site will support more than 1,200 ‘cyber soldiers’ and civilian employees. It will reportedly cost $180 million, and will be built by B.L. Harbert International. 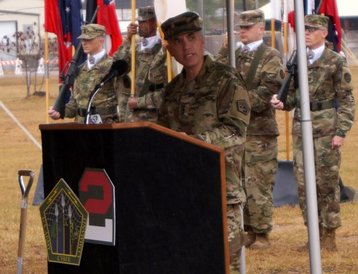 “The construction of the ARCYBER headquarters is one more step in reaching the Army’s, this community’s, and our nation’s cyberspace goals,” commanding general of the US Army Cyber Center of Excellence and Fort Gordon, Maj. Gen. John B. Morrison Jr, said.

Secretary of the Army Eric Fanning added: “Cyberspace can be considered the ultimate high ground, which means that in modern conflicts, ceding cyberspace invites defeat.”

“So what we’re building here won’t be your typical government facility. It will be the US Army’s premier warfighting platform for cyberspace operations. It is the weapon system that will ensure our cyber warriors go into battle with the tools they need, and so that all our soldiers can operate in more secure environment.”

“We are demonstrating to the American people that our commitment to fighting and winning the nation’s war extends to cyberspace – to protecting commerce, communication and critical infrastructure that allows our nation to thrive. We are demonstrating to our adversaries that no matter how warfare may change, we intend to fight, win and dominate.”

Second Army commander Lt. General Paul Nakasone said: “We are constantly growing operationally, institutionally, and in preparation for the future fight. It will ensure that our teams, both offensive and defensive, train, plan and operate in a state-of-the art facility equipped with cutting-edge technology, enabling them to provide superior support to joint and Army warfighters.”

He finished the talk by calling this a turning point in the ability of the US to project power in cyberspace. ”We send a powerful message – that the United States Army is ready, willing, and able to defend our nation and our national interests, to defeat our adversaries in land and in cyberspace, and to protect the freedoms we enjoy today, tomorrow, and into the future.”

The building itself is located near the NSA’s Georgia Cryptologic Center, a $286 million, 604,000 square feet (56,100 sq m) facility codenamed ‘Sweet Tea’ that focuses on collecting signals intelligence from Europe, the Middle East, and North Africa.

The facility is thought to house some 4,000 employees, along with a 17,000 square foot data center and a 9,000 square foot communications center. NSA Georgia was instrumental in the development of the Geolocation Cell, which allows the US to track and kill individuals by targeting their mobile phone and launching a drone strike. 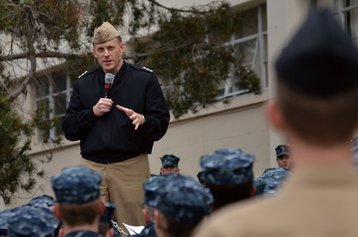 Command and no control

The US Cyber Command, established in 2010, has been working out of various facilities in the US, as well as leased space in the Washington metropolitan area. By the time the new complex opens, Cyber Command is expected to have become a full combatant command - that is, the division will have equal standing with Central Command, US Africa Command and the other combatant commands.

However, a debate is currently underway over the future of the US’ cyber military strategy as the Trump administration readies to take over the White House.

The Washington Post reports that Pentagon officials have urged Obama to fire Navy Adm. Mike Rogers, chief of both Cyber Command and the National Security Agency, partially because of his performance, but also because some in the government want the NSA and US Cyber Command to be led by different people. In particular, Defense Secretary Ashton B. Carter believes that the NSA should be run by a civilian.

This process is complicated by the change in the executive branch, with Rogers meeting Donald Trump two weeks ago. The Post writes: “In a move apparently unprecedented for a military officer, Rogers, without notifying superiors, traveled to New York to meet with Trump on Thursday at Trump Tower. That caused consternation at senior levels of the administration, according to the officials, who spoke on the condition of anonymity to discuss internal personnel matters.”

We have analyzed Trump’s known views and comments on cyber security and cyber warfare in detail previously, but will continue to follow the story as it develops.

As Russia and China come together on issues of cyber security and surveillance, so too is the US turning to old allies for partnerships in the field.

This week, the normally recalcitrant Congress voted overwhelmingly in favor of the United States-Israel Cybersecurity Cooperation Enhancement Act of 2016, a seven year program to provide grants to joint ventures between Israeli and US companies, non-profits, academic institutions and government entities on issues of cyber security.

Previously, the US and Israel’s Unit 8200 are thought to have worked together on Stuxnet, the first known case of a cyber attack destroying physical infrastructure.

Israel, which opened its own Cyber Command last year, is also set to benefit from $38 billion in military aid over the next decade. Its defense ministry is currently holding its largest-ever technology tender to build multiple data centers.

These moves are all designed to increase the US’, and its allies’, power and effectiveness in an era of increasing numbers of cyber attacks. We have talked about Russia’s alleged actions in Europe, and in the US election, as well as China’s possible state-sponsored cyber espionage attacks, but physical warfare remains a possibility.

Here, the US Army’s cyber capabilities will still play an integral role, especially as digital machines become increasingly important on the battlefield. As we discussed in our coverage of the US Army’s move to the cloud, it is open in its views on wanting to create active combat robots with effective cyber security safeguards.