US megadrought is the worst in 1,200 years, exacerbated by climate change

At the same time, we are using water more than ever before - including to cool data centers

The southwestern United States is in the midst of the worst megadrought in at least 1,200 years, researchers found.

The past two decades have been the driest period in the American Southwest since 800 AD, with the researchers pointing to climate change as one of the major causes for the devastating drought. 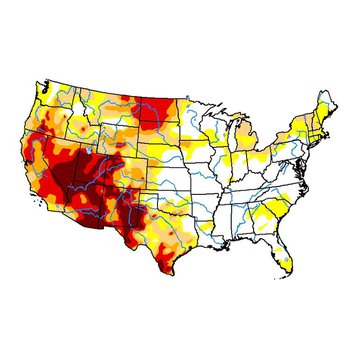 The study, from researchers at the Lamont-Doherty Earth Observatory of Columbia University, compared current conditions to the last megadrought in the late 1500s, and found that the current crisis is worse.

That's partially down to anthropogenic climate change. Temperatures in the Southwest were around 1.64 degrees Fahrenheit higher in the past two decades than the average from 1950 to 1999, pulling moisture out of the soil, vegetation, and forests.

"It's a slow-motion train wreck," one of the authors, Jason Smerdon, told NBC News. "What we showed in the paper is that increasing temperatures in the Southwest contributed about 42 percent to the severity of this drought."

It may also mean that the drought lasts longer. Previous megadroughts showed signs of waning 22 years in, whereas this one is as strong as it ever was. Several consecutive wet years will be required to end the drought - but the researchers estimate that there is a 75 percent chance the drought will hit the 30 year mark.

The megadrought has depleted water supplies in two of the largest reservoirs in North America, while wildfires have become a year-round threat in some states.

At the same time, heatwaves mean that individuals and industry are making more use of water than ever in an effort to remain cool.

Data centers are among those consuming vast quantities of water to operate.

The total annual operational water footprint of US data centers in 2018 is estimated at 5.13 × 108 m3, Department of Energy researchers found last year - but they admitted the number was based on a lot of guesswork due to a lack of industry transparency.