The Immersion Cooling Facts site sets out the benefits of immersion cooling, while dispelling "myths" about the technology, the companies said.

Rolf Brink and Peter Poulin, CEOs of Asperitas and GRC respectively, explained the site in a video interview at DCD>London on 6 November. As well as listing benefits that data center operators might miss, the site explores new opportunities such as Edge, and distinguishes between different immersion cooling methods. 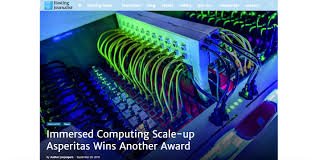 "We are two competitors, and unlikely collaborators who have come together with the sole purpose of separating fact from fiction in order to ensure a healthy, high quality, and reliable immersion industry," says the site.

At DCD>London, the two expanded on this: "We’ve been seeing a lot of traction in the market for immersion cooling," said Brink.

Despite being competitors, the two companies were already collaborating on white papers and standards in the Open Compute Project (OCP), along with other immersion cooling rivals Zutacore and Submer. As Poulin describes it, GRC and Asperitas found that their answers to a list of key questions matched: "We were confident that we had information we could share with the market that was accurate and consistent."

Some liquid cooling systems rely on "two-phase" operation, where the cooling fluid is allowed to boil, and then condense. In theory, this can remove heat rapidly because it uses the latent heat of vaporization, as well as the heat capacity of the fluid. In practice, the boiling process creates more mechanical strain on the system, so in many cases single-phase operation (as offered by the two partners) is preferable, the companies said.

"That’s part of what we do in educating the market," said Poulin. "It's Immersion 101 questions. You’ve really got to understand the science."

In space-constrained markets, liquid cooling takes up less floor area, and in Edge locations, liquid cooling provides the benefit of doing away with the need for specialized white space with a raised floor, that is only available in purpose-built data centers.

Looking around the DCD event, Brink said: "At an event like this, have you ever seen an air-cooled rack fully equipped with servers, actually switched on and running at performance? Of course you haven’t, because you aren’t in a data center. But here at this event today, there are four immersion technologies live and running - in an event that was never designed as a white space.

"You can deploy immersion technology anywhere: you don’t need a data center. It’s great if you have one. But when it comes to edge deployments, this is where the world is changing.

"We don’t think immersion is right for every use case. But we want to make sure customers can make fact-based decisions about which technology is appropriate."