Is that an oncoming train or, at long last, the light at the end of the tunnel?

We are all, I hope, notionally aware that data generation, transmission, storage and dissemination takes energy, so the exponential growth in data traffic serves as a proxy for growth in power consumption.

On the other hand we know that Moore’s Law has been the main driver behind the (also exponential) compute/storage capacity of the ICT hardware – firstly by Gordon Moore (>35 years ago) predicting a doubling of the number of transistors on a single chip every two years, then revised by his company, Intel, to doubling every 18 months to allow for the increased clock-rate and, sort of finally, revised by Raymond Kurzweil who combined the physical attributes with better software and came up with a doubling in capacity every 14 months.

More recently Koomey’s Law simply re-expressed Moore’s Law in in terms of computations per kWh and showed the trend back to the earliest powered computational machines, rather than the 2,600 transistors per chip in 1971. The result can be best expressed by considering a facility built in the year 2000 with 2,000 cabinets rated for 1kW each that can now be out-computed in 2018 by a single 4kW cabinet – a staggering technical achievement by any measurement or benchmark. It has certainly made any improvements in PUE paltry to the point of almost inconsequential.

So, given the huge capacity curve, why do we have so many data centers and why have they grown in power rating? We simply must compare the two growth rates, data versus capacity, which is very easy to do.

For the past 16 years (since June 2001) I have been tracking the monthly data traffic statistics of one of Europe’s largest Internet exchanges. The growth until the beginning of 2017 followed a fascinating yearly cycle, with most growth in the first six months of each year followed by a relatively stable platform - but always clinging on tightly to an exponential monthly curve of +4 percent compound growth-rate. 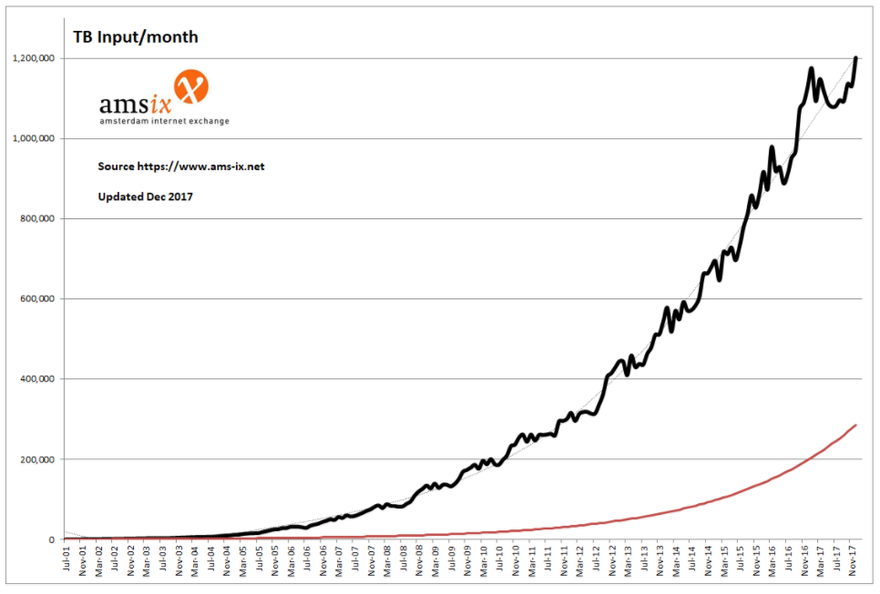 Starting in June 2001 the input traffic was 690TB/month but by December 2017 it had risen to just over 1,200,000 TB/month (with a record peak of 5.6TB/s) – a 1,700 times increase equivalent to a CAGR (Compound Annual Growth Rate) of 60 percent. The ‘staircase’ that you can see in the growth curve is fascinating, with ever higher rise and steeper going – until January 2017. The dotted line is +4 percent per month.

Over the same time the ICT hardware, from Moore’s Law et al, has followed a 40-45 percent CAGR (the red line on the graph), so the delta between demand and capacity, 15-20 percent, can be used to explain data center growth.

It is also not wholly unreasonable to attribute most growth to the individual national penetration of mobile phones/PDAs and high access-speed networks. Faster broadband drives energy demand.Hence markets with a low birth-rate, high disposable income, ever-fast access enabling lots of social networking, HD & UHD/4K video entertainment and >100 percent active SIM cards (compared to population) will be experiencing a slowing of the data growth rate compared to, for example, an emerging economy with increasing proportion of younger and aspirational population, rapidly increasing mobile phone coverage and device ownership which is skipping copper in favor of fiber and straight to 5G – where the current annual growth rate will be considerably higher than the 15-20 percent suggested above.

Certainly, I know of many enterprise facilities, whose business is not predicated on HD images, where their ICT service is increasing in volume but their data center power is declining annually as they refresh hardware.

Because of these two diverging growth curves I have been opining for the past 10 years that the demise of Moore’s Law (which, if not already dead in its original meaning, will certainly not last much longer with silicon as a substrate) will lead to a capacity crisis as the tsunami of data overwhelms the fiber networks. OK, a change from silicon to graphene may postpone the problem for 10 years but the idea that the hardware will cease to follow its historical capacity per Watt is alarming to say the least. There other things we could do – utilization being the low-hanging fruit – but we should do those regardless…

So, why do I now think that the oncoming light in the tunnel is not a huge freight-train overloaded with bytes speeding towards us but the daylight at the end? Well, it may be a premature reaction, but the last 12 months have broken the pattern that has been so resilient since the data source started in 2001. Just compare the monthly input traffic of 2006 with 2017: 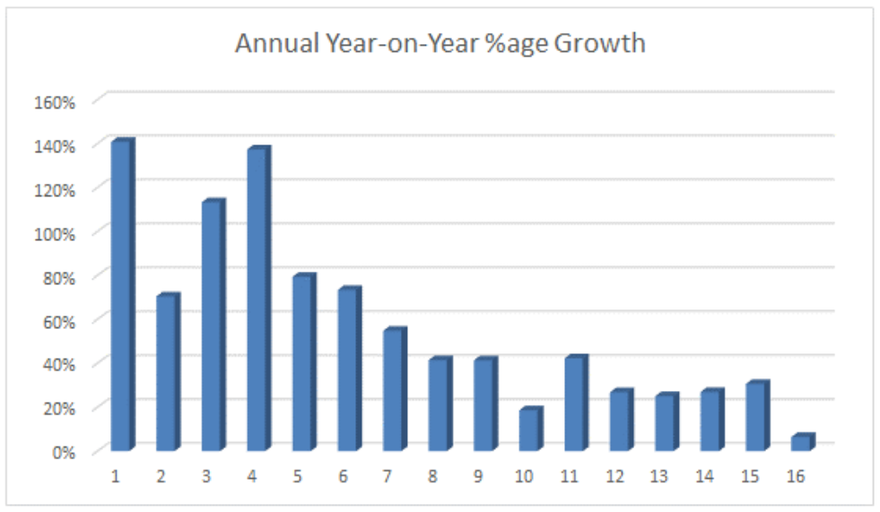 The monthly traffic has largely been static through 2017 with much less variability per month than ever.  Starting the year in January with 1,174,500 TB/month and ending in December with 1,200,500 TB/month, only 6 percent increase for the year, and not setting a new peak every couple of months as has been the norm in prior years, is remarkable change. I’m feeling optimistic, maybe misplaced, but it will mean that data centers will continue to grow in in the emerging economies where phone penetration is not yet >100 percent. 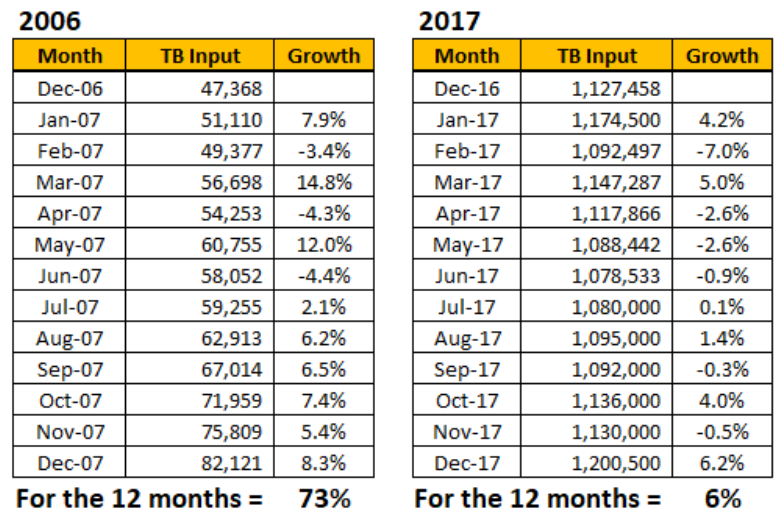 Now, 6 percent CAGR would be great for my money, and is healthy for most industries, but it’s far less than the exponential explosion which went every year before. Maybe Moore’s Law and all its iterations will finally start to overhaul the demand? At least in Europe, and I suspect in the USA.

It could well be that European traffic is slowing down (not, yet, ‘going’ down) as high mobile phone penetration reaches into every corner of the poorer parts of Europe? It may depend upon the IoT and ‘edge’ computing but as long as the content is kept local (and maybe the content isn’t UHD) the growth in ICT hardware and photonics research should stay ahead of the roll-out – which will definitely start in the richest parts of the world.

As an aside, it is rather odd to see the human need for a ‘better’ phone – so it’s not unusual to see the latest smartphones in regions like South America that are still working on 2G!