Facebook's cold storage - how cool is that?

The way Facebook stores your old photos is pretty exciting. When other markets pick up the idea, it will be even better

Facebook has shared the way it stores old photographs in  “cold storage” sites. Exciting as it is, I am looking forward to seeing the same ideas in use elsewhere and for other jobs.

New photos are shared often, so Facebook keeps multiple copies of them out on its regular servers. But with two billion photos shared each day, there are a lot of older photos. Users may want to recall these at any moment - the #ThrowbackThursday phenomenon - and Facebook, if it knows what is good for it, has to make those pictures readily and reliably available.

That’s a specific requirement - but by no means unique. Other areas of the industry may have broadly similar requirements, so there should be plenty of interest in Facebook’s blog post last week that described how it built a system from the ground up for the purpose. 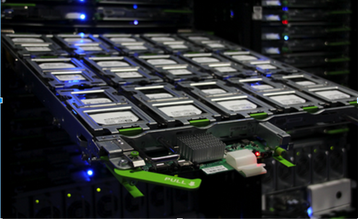 Tape drives? no thanks

Traditionally, this kind of data would be kept on tape drives, or permanent storage such as optical disks, but Facebook has been through a whole range of options. Last year, the company discussed a prototype cold-storage system in which a robot arm selects Blu-Ray disks. The year before, it came up with a more unlikely plan - to move all archival data on solid state storage.

Whatever other storage is in play in the data center, hard drives have shown remarkable longevity. This year, Facebook has shared details of a system which uses traditional hard drives - but in a configuration which treats them quite differently to normal.

The whole system is re-designed around an offbeat premise. Drives are poered down when they are not being used and in each storage tray it is possible to power only one drive at a time.

This means that Facebook’s OpenVault storage rack, based on the Open Compute Project rack design could be modified further to include fewer power supplies and more hard drives, and the overall system would use less power.

One rack of cold storage can hold 480 4TB drives, making 2 Pbyte - and it only has one power shelf, holding five power supplies, instead of having three power shelves, each holdeing seven.

This makes for a rack so heavy, Facebook had to modify the castors on which it can be moved, as the normal rubber wheels got crushed.

But it’s also a lot cooler than a conventional design. It needs fewer fans, and uses only 25 percent as much power.

Facebook also used Reed-Solomon error correction, instead of multiple copies of its files, so each Gbyte takes up 1.4Gbyte of space, instead of two or three Gbyte.

Could you use this?

If you have a big enough need for a special kind of system, then you can do it at scale, with a specialized design. There’s no specialized hardware here - at bottom, this is a simple re-organization of some very generic hard drives, power supplies and fans.

This means that this same design could be adopted by other users, with similar needs, in different markets. Facebook moved away from tape or Blu-Ray, because it wanted quicker access to the old images. Esssentially, people who find it easy to get hold old pictures will republish more of them, generating more views, more likes and more ads on Facebook.

But other organisations with a lot of files currently archived on tape might have different reasons to want faster access. Other image libraries obviously, or music stores. But what about firms with a big customer base and lots of archived documents? If they can get hold of old transactions details easily, then they may be able to perform better analytics - or offer better customer service.

For instance, not everyone does their tax return quickly - and if you want to look back through bank statements which are two years old or more, you may find you are in a zone where your bank can’t really help you. A bank which offered more old statements online might get more business.

There will be more examples like this - and I expect we will hear of them soon.