What happens at Apple rarely stays at Apple. The company tries to closely manage all news, but the media watches it closely. So, in the last couple of weeks, when Apple data centers suffered a fire and a chemical leak, the stories were widely reported - even though the incidents were comparatively minor. 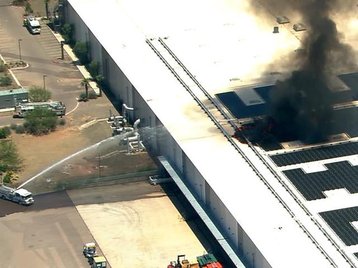 First, a fire started at the data center in Mesa Arizona which Apple inherited from GT Advanced. The blaze apparently started in the rooftop solar panel system, and was quickly put out, with no injuries.

Then five staff at one of Apple’s sites in Maiden, North Carolina, were hospitalized after a chlorine spillage. Again, there seems to be no permanent damage, and the people were all back at work next day.

Apple doesn’t seem to have suffered the other major data center danger - electric shock - lately, but it’s something which Chris Crosby of Compass Data Centers recently raised as an issue.

There’s no doubt that data centers are a very safe environment to work in, especially compared with mining, construction or heavy industry. But there are hazards in the workplace,and data center owners and managers need to keep them controlled.

Electricity is an essential need in data centers, and it goes through multiple transformers, along with systems to maintain the power during any interruption. Crosby has pointed out that the requirement for constant availability can lead to practises which increase risk to people - working on equipment while it is live, for instance.

Fire is a risk almost anywhere, but the presence of high voltage electricity in data centers increases that risk - and multiple energy inputs will add further possibilities of failures, as Apple found.

Inside the data center fire prevention systems are possible - even essential. But those systems have to be built so as not to add other safety concerns. Halon gas has been phased out for the damage it caused to the ozone layer, and now HFCs (halon fluorocarbons) are being taken out to reduce global warming.

These are admittedly longer-term environmental issues, rather than direct health and safety issues.

But data centers do require some toxic chemicals. The workers at Apple were exposed to chlorine, apparently used in connection with the site’s cooling system. Chlorine is used to purify water, which one way or another features in a lot of different kinds of cooling systems in data centers.

Chlorine is in fact one of the most widely used industrial chemicals, and a very dangerous one too, with the possibility of poisoning, or even explosions. But data centers shouldn’t raise huge concerns: the quantities used in cleaning water there will be small compared with those used in industrial processoes - or even swimming pools.

But as with any risk management issue, data centers should consider all the possible dangers and deal with each appropriately.

There’s no evidence that Apple hasn’t done exaclty that in its US data centers. I hope the same is true in all the data centers that don’t excite the same level of media interest.