Face with the current wave of resignations, the industry should get to grips with the problems underlying the talent shortage

The Big Quit - also known as the Great Resignation - describes the phenomenon of workers exiting their jobs post-pandemic in search of greater satisfaction. Earlier this year, PwC investigated just how big an impact this is having on around the world - it discovered one in five workers said they are very or extremely likely to switch jobs in the next year.

The problem is especially stark in the technology industry. In July 2022, the UK tech network organization TechNation called the talent shortage a “real issue” that could “stifle growth”. Indeed, according to the KPMG and REC UK Report on Jobs, IT & computing posted the strongest increase in demand for permanent staff in May, even more than in the hotel & catering, a sector widely reported to struggle filling vacancies post-pandemic.

And in trosierenter industry specifically, the picture is no more rosy - the Uptime Institute revealed 325,000 net new full-time employee positions will be needed in the six years to 2025.

How did haven’t here? The general perception has been that there hasn’t been enough students taking STEM courses and with lack of uptake, we should expect to see shortfalls.

It is also clear the industry needs to think about its approaches to hiring and retaining tech workers sooner than later, or they could see even more workers quitting, putting even greater workload onto other employees, which could see their own performance decline under the pressure.

The data center industry is fortunate in how the pandemic shone a light on the important essential work of engineers. Yes, the buildings and infrastructure are important, but it’s the people that keep them running and that was made especially evident during the lockdowns. We therefore have a unique opportunity to educate new talent and build on that interest to help futureproof the workforce. But how?

Prioritize people and their needs

If data center companies aren’t addressing the tech talent shortage by starting with ways to retain their existing workforce, they are missing a huge trick. Organizations should analyse what is driving staff to leave, identify what is important to them, and give them the tools, training and opportunities they need to succeed in their roles.

For every 18 year old hired, it’s a minimum five to six years of time investment training them to be fully qualified, confident engineers, so it’s vital to keep them engaged on an ongoing basis. Keep exposing them to new skills and challenges to develop them so they don’t feel the need to move, is crucial.

One key need for workers will always be having the right resources around them in terms of colleague support. Understaffing can put pressure on teams, causing stress-related health issues that can impact on individuals’ professional and personal life, such as headaches, difficulty concentrating and being more prone to frustration. But being empathetic to people’s needs and ensuring they have time off for health appointments, that tasks are being split fairly and evenly and that they are using their annual leave allowance can help alleviate worker stress, making them feel looked after and positive about work each day.

During the pandemic,.there were great examples of leaders dedicating their extra time to asking after people and their family, so it is important not to lose that now the UK has opened up again.

Companies should also empower their workers to maximize their potential, working with them to decide stretch goals they can use to progress and see their position as not just a job, but a career. That requires respectful mentors and managers who have enough time to give to listening and training staff, as well as developing a strong culture that unifies and bonds teams together.

Another approach organizations should take is to think outside the box when it comes to recruiting new staff. They shouldn’t just look in the usual places but be open to candidates from unusual backgrounds with transferable skills, even those who may not have previously considered a career in the data center industry.

For example, the role of a data center engineer requires the ability to solve problems strategically and work well independently as well as in a team - skills that can be found in a variety of other sectors including energy and aviation. Since the start of The Big Quit, we have seen great CVs from a variety of sectors including pharmaceutical, petrochemical and the military. After all, electrical skills for example are good skills wherever you were trained.

Interviewers also need to be mindful of the terminology they are using so as not to unnecessarily alienate candidates who just aren’t familiar with industry jargon. If you can relate questions to something interviewees easily understand, you’ll get the answers you’re looking for. Managers can give them the product training but it’s harder for them to teach the core qualities they’ll need to be successful.

Organizations could tap highly performing colleagues in data center engineering and other teams to share stories about their passion - what they love about their job - to inspire others to learn more. For instance, they could share a day in the life of their role to break down myths and misconceptions and give examples of work that challenged and engaged them. This way, others can envision themselves in a role more easily and what they could bring to the table, which could also improve the quality of candidates applying for roles due to them being more informed about what a position entails before they’ve even sent in their CV for consideration.

Invest in the next generation

Furthermore, data center operators cannot just assume that what staff want in a role now, will be what employees want in five years’ time. There is a new generation ready for work, and it is vital companies adapt and evolve work to attract and secure new graduates and fresh minds, as these people represent the future of the industry.

As a father to teenage daughters, I want the world to be a place where they feel they have the same opportunities that I do. With the technology industry being so male-dominated, it is imperative that leaders look for diverse talent that bring a range of perspectives to teams, and not just for the reasons you might expect.

According to McKinsey & Company, the relationship between diversity on executive teams and the likelihood of financial outperformance has strengthened over time. Indeed, everytime we don’t have enough diversity in teams is an opportunity missed to have a new perspective or skill set. The industry is missing huge waves of talent because it is not making itself approachable enough. We cannot continue to grow as an industry with the limited talent pool we have currently - it won’t fulfill the demand from one demographic segment of the population.

Thinking about my own route, my role models had a big impact on my decision to enter and stay in the data center industry. A lot of my family members, who I looked up to, were engineers, so that field always appealed to me. Aged 19, I applied to - and was fortunate enough to be offered - an aeronautical apprenticeship with BAE Systems. That in-depth detailed technical apprenticeship gave me a hugely strong knowledge foundation, but also the motivation to forge the career I am still passionate about today. 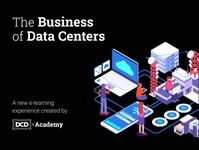 The Business of Data Centers

Isn’t it about time that we demystify the data center and help more people understand the evolution of one of the most exciting infrastructure industries of the 21st century?

If the industry drove more interest in how exciting the industry and technical qualifications can be, we can excite more young people and improve diversity in the industry. For example, we can touch on how they can potentially give candidates a route to faster earnings versus other qualifications - especially during the current cost of living crisis. We know this has been a major reason for the uptick in candidates applying to University Technical College Heathrow, which has one of the UK’s first data center-focused curriculums.

Data center companies could work with industry organizations such as the Data center Coalition or Data center Alliance (DCA Global), the trade association for the data center industry, and local institutions such as schools and universities to encourage young people to study STEM subjects and consider a career in data centers.

Leadership could also work to understand how they can do better as a company to retain diverse talent, speaking to employees about their experiences and investing in DEI and unconscious bias training to make workers more aware of their own role in creating an inclusive work culture. That way, they can build an environment that allows everyone to feel able to bring their whole selves to work, thrive and be offered exciting opportunities for development.

Addressing the skills gap is a necessity

If companies do not act now, the tech skills gap will only worsen, impacting on employee performance, client service, and ultimately companies’ bottom lines. Conversely, if organizations put people at the heart of their businesses, spread your search wider and consider candidates from untypical backgrounds and inspire the next generation, they give themselves the best chance of being an employer of choice and enjoying sustained growth, which will pay off in both the short and long term.