The rise of single-mode fiber for data centers 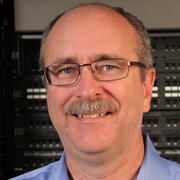 Over the past few years, Leviton has polled customers about the type of fiber they would install today to prepare for the future, with single-mode OS2 fiber growing strongly in popularity over that time. In fact, in our March 2021 poll of 250 network professionals, more than 60 percent said they would install single-mode (OS2) today, with multi-mode OM4 coming in second at 20 percent and OM5 at 14 percent.

This change is the result of decreasing cost and recent standards committee activities that continue to promote more single-mode options for higher speeds, such as 200 and 400 Gb/s. As this trend continues, new data centers will find single-mode fiber a more enticing option. 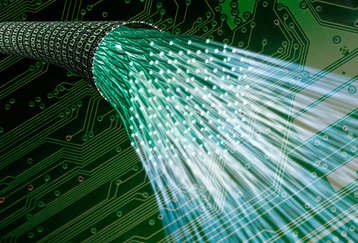 As with most data center networking trends today, the hyperscale and cloud data center operators tend to be the ones driving change. Whether density, termination methods or infrastructure types, market leaders and high-profile companies offer techniques to mimic or avoid. But the sheer size of hyperscale facilities – along with the lightning-fast speeds required to serve data center customers – have made the bandwidth and reach capabilities of single-mode the infrastructure of choice for most tier 1 and many tier 2 installations.

There was a time when single-mode transceivers were typically seven-to-eight times the cost of multimode. But the purchase volumes of hyperscale and cloud data center operators have led to a significant reduction in cost for single-mode infrastructure. As hyperscale operators are deploying 100, 200 and 400 Gb/s channels, and large enterprise data centers are moving up to 100 Gb/s, we begin to see cost parity of multimode and single-mode channels at those higher bandwidths.

For example, when looking at the single-mode 100G-PSM4 and multimode 100G-SR4 – both parallel optic variants for a 100 Gb/s channel – the two options have become essentially the same price for optics and cabling to build a complete channel.

The March 2021 High Speed Ethernet Optics Report from analyst group LightCounting found that pricing of 100G-SR4 transceivers dropped below $1/Gbps in 2019, and 100G-PSM4 reached the same price milestone in 2021, with DR1, FR1, and CWDM4 not far behind. PSM4 transceivers were specifically designed as a lower cost option for at least 500 meters of reach, using an 8-fiber MPO/MTP® connection. Also, the price for long reach single-mode solutions such as 100G-CWDM4 (2 km over duplex fiber) have dropped significantly and will continue to drop over the next several years. 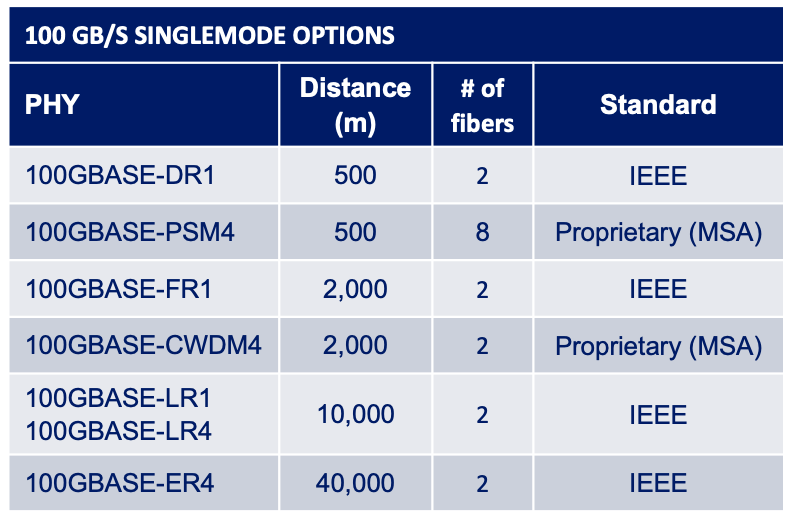 When transceiver cost is less of a factor, single-mode becomes the clear choice over multimode. For this reason, 100 to 800 Gb/s single-mode transceivers now account for 60 percent of the total market volume, according to LightCounting.

One major advantage of single-mode is its longevity: there are simply fewer generations of fiber to deal with. If you installed OS1a or OS2 single-mode years ago, you would be better prepared for future growth and support a current generation speed at the distance specified by standards.

One major advantage of single-mode is its longevity: there are simply fewer generations of fiber to deal with Dave Mullen, Leviton

For example, the OS2 cable you installed 10 years ago could support a new 100 Gb/s network, such as 100GBASE-DR at 500 meters. The connectors may need replacing, but you would not need to rip-and-replace new cable during tech refreshes. With multimode, an OM1 or OM2 would not be able to support a new 100GBASE-SR4 network, OM3 could only support SR4 at 70 meters, and OM4/OM5 at 100 meters.

At the same time, single-mode enterprise transceivers can include more ‘hops,’ or connections, in a channel. This is because the channel insertion loss budget is much higher with single-mode than multimode – 3 dB to 4 dB, versus 1.9 dB. This enables data center operators to have more flexibility in their network design.

While next-gen network standards under development include both multimode and single-mode fiber options, the majority of 100, 200 and 400 Gb/s transceiver options recently introduced are for single-mode networks, and recent standards committee activities continue to promote more single-mode options for higher speeds. Some of the standout standards projects include:

It is important to point out that multimode fiber isn’t going anywhere. The majority of enterprise data centers already have multimode cabling installed, and many of them will take advantage of existing infrastructure when upgrading to 25, 40 or 100 Gb/s in the future. But with lower transceiver costs – along with superior longevity, distance and upgradeability – single-mode fiber will be an increasingly attractive option for new data center networks.