What fuel is used by power stations in Europe and the US today? 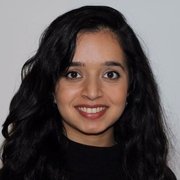 Raman Madar is a Design and Application Engineer, at Excool

Fossil fuels still dominate, and water use will be important as the grid shifts to greener energy

Many countries aim to transition from fossil fuel power generation to using renewable sources as an alternative. By 2050, the UK government requires the country to diminish greenhouse gas emissions to net zero, as well as planning to gradually eliminate all coal-fired power generation by 2025 (Darrell Proctor, Power magazine 2020). The United States of America has similar goals: by 2050, it desires to be carbon neutral and have a 100 percent clean energy economy (Dan.Murphy, CNBC, 2021).

The global power plant database obtained from the World Resources Institute was analyzed to identify how many operating power plants are currently sourced from renewable energy compared to fossil fuels. As of June 2021, there are 9,511 power plants operating in Europe and it is recorded, over 2500 of those are fueled by solar energy (29.6 percent), followed by wind turbines (23.9 percent) and hydropower (21.4 percent). It was also found there are just under 1,500 non-renewable power plants operating in the Europe. Where coal, gas, oil and nuclear account for 4 percent, 8 percent, 1 percent and 0.8 percent of the total number of operational European power plants respectively.

Similarly, the US has 8,686 operational power plants and over 2,000 of these are solar based accounting for 26 percent of the total number of power plants there. This is followed by gas (20 percent), hydro (17 percent) and wind (12 percent). Coal, oil and nuclear account for roughly 4 percent, 10 percent and 0.7 percent respectively.

Reviewing this data, we might think as the majority of operational power plants in Europe and the USare solar based, they will generate the greatest amount of electricity. Having said that, the amount of electricity generated from each fuel source is quite the opposite. 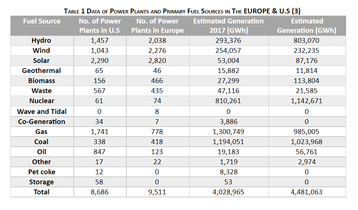 It is clear fossil fuels still dominate the Europe and US power plant industry and although Europe is taking a lead with the transition from fossil fuels to green energy, much more needs to be done in order to achieve the 2050 long-term climate targets. We can still appreciate the growth of renewable electricity generation which in 2020 amounted to 11 percent in the US and 10 percent in Europe(Robert F. Ichord, Atlantic Council blog, 2021 ).

There are multiple important factors to consider during the shift. Water is a major influence on the choice of renewable fuel source for electricity generation as currently, there is water stress globally due to climate change. For example, in the US, there is water scarcity and large, powerful rivers such as the Colorado River have started to run dry in certain areas (Shannyn Snyder, The Water Project, 2021). Therefore, it is vital to evaluate the water needed during power generation to ensure water supplies are readily available.

Blue water is separated into two categories: withdrawal and consumption. Withdrawal is the volume of water removed for use from a water source. Consumption is the volume of water removed and not returned to the source. Focusing on just the operational process of power plants table 2 presents the water withdrawn and consumed from different fuel sources. 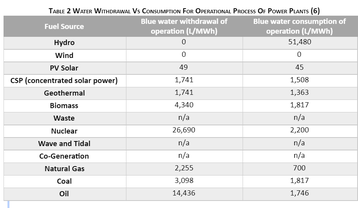 As expected, hydropower consumes the most water when generating electricity due to the evaporation of water from the surface of the reservoir (Good Energy). Nuclear power stations also require substantial volumes of water due to the need to create steam at lower pressures and temperatures for safety purposes. Fossils fuels; oil, coal and natural gas follow similar trends. Previous studies reviewed by Jin et al identified that many studies focused on the cooling system of the power plant, as this uses the most water during the operational process (SEIA, 2021).

As Europe and the US move towards a net-zero carbon economy, it is not only crucial to move away from fossil fuels to renewable sources, but also to wisely choose the renewable fuel source based on the location of the power plant. This is due to the necessities of water in the life cycle of power plant production as the choice is dependent on several factors; a country’s climate conditions, impacts related to water shortage and available water resources (USGS). Furthermore, it is evident energy and water are highly dependent on each other in electricity generation and water will play an increasing role during the shift to using clean technologies.