The Amsterdam Internet Exchange is broke through the 8 Terabits per second barrier on Monday, March 30 around 8.30 PM local time.

The traffic jump comes as people shelter at home during the Covid-19 outbreak, and turn to online services for work and recreation. 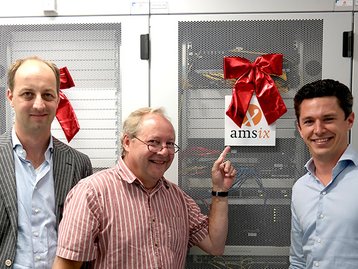 In February, the daily amount of traffic exchanged on the AMS-IX platform was between 48 to 50 petabytes, the exchange said. But from the 11th of March, the day that the World Health Organization declared Covid-19 a pandemic, the service saw a steep rise in the amount of Internet traffic exchanged.

Daily traffic is now around 56 to 58 petabytes, an increase of 17 percent compared to the previous month.

Over 875 networks are connected to the Amsterdam interconnection hub, 75 percent of which are of European origin. AMS-IX noted that in the past few weeks many of the networks have been upgrading their port capacity to handle the traffic growth.

“We are aware of our critical role as vital infrastructure and have taken all necessary measures to facilitate Internet growth," AMS-IX CEO Peter van Burgel said.

"Millions of people are quarantined and depend on their Internet services for work and to keep a line with the outside world.”

The Frankfurt Internet exchange DE-CIX has also seen record traffic, with more than 9.1 Terabits per second of data throughput on March 10.