Cabo Verde Telecom (CVTelecom) has signed an agreement with the consortium behind EllaLink submarine cable to install a landing station in Praia, Cabo Verde, off the northwestern coast of Africa. The telecommunications provider will invest $25m in the project, with the entire network expected to cost around $250m.

EllaLink will connect Brazil and Portugal - making it the first fiber optic cable between the world's fifth largest country and Europe since a copper system was installed in 1999 - with original landing points in Madeira, the Canary Islands, and indeed, Cabo Verde.

The new system will span 9,200km and will connect data centers in Madrid, Lisbon and São Paulo. 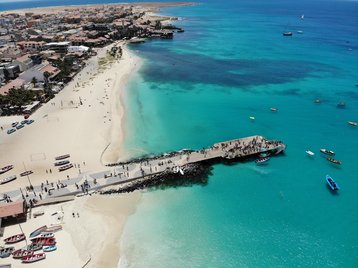 Time to get going

The project was kickstarted by Brazilian network provider Telebras and Fiera Infrastructure – whose IslaLink system connects the Balearic Islands to Spain via submarine and terrestrial backhaul fiber. Most of the cost is shouldered by specialized infrastructure equity fund, Marguerite II, but EllaLink also received a €25 million ($27.2m) investment from the European Commission as part of its Building Europe Link to Latin America (BELLA) initiative.

EllaLink board chairman Alfonso Gajate said the agreement with Cabo Verde Telecom was “fundamental to the project.”

He added: “Connecting Cabo Verde to Europe and Latin America with an initial capacity of 200Gbps will enable CVTelecom to create an Information Technology platform in the Atlantic. We are delighted to have confirmed our partnership with CVTelecom today and look forward to continuing to work together on the implementation of EllaLink.”

Originally expected to come online in early 2018, the system is now scheduled for 2020, and will provide an alternative network link between Europe and Latin America, 40 percent faster than existing systems routed through the US. It will also place international traffic out of reach of North American surveillance agencies, an issue that became of prime importance following whistleblower Edward Snowden's revelations of the NSA's wide-sweeping surveillance operations involving US networks.