Cox Edge has launched a new location in Merrifield, Virginia.

The Cox Group subsidiary announced the news this month, saying the expansion into Fairfax County extends its ability to deliver Edge compute resources to a ‘key tech region’ while also servicing the aerospace, cybersecurity, and healthcare industries in the NoVa area. 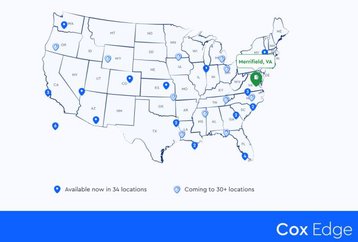 Cox Communications launched Cox Edge last year, launching in around a dozen US markets; while many were in Cox's traditional cable footprint such as San Diego, Las Vegas, and Phoenix, others were outside that footprint. The company said it currently offers services from 34 locations with another 30 planned across the US.

Cox Edge aims to offer Edge cloud services through a cloud-native stack and orchestration platform. It aims to use both Cox Communications/Cox Business facilities and networks, as well as infrastructure partners including content delivery network (CDN) provider Stackpath.

Cox, along with Juniper Networks, led a $216 million Series B funding round in Stackpath in 2020.

Founded by the newspaper magnate and politician James M. Cox in the late 1800s and originally in the newspaper business, US conglomerate Cox Enterprises entered the radio industry, before moving into TV & broadcasting in the 1940s and then the cable television industry in the early 1960s, before moving into telecoms. Today it also operates major automotive and media arms.