Major Fastly outage brings down much of the Internet: Amazon, Twitch, Reddit, and more offline

The Verge, The Guardian, and others go offline

Update: Here's what caused the outage, and why the company behind the failure saw its shares jump

A huge outage has brought down a number of major websites around the world.

Among those affected are Amazon, Twitch, Reddit, The Verge, The Guardian, ZDnet, The New York Times, Freetrade, The Financial Times, Pinterest, Kickstarter, Ebay, The Telegraph, CNN, PayPal, Shopify, HBO Max, Gov.uk, and Imgur. Google searches are also partially impacted, as is the Google Cloud Platform. While Twitter is up, its emoji platform is offline.

The issue has been traced back to content delivery network Fastly, which is down. The company runs an Edge cloud between companies' data centers and the end user, reducing latency, protecting from DDoS attacks, and helping them handle traffic spikes.

Update: The website of the Edge cloud platform Fastly is currently offline.

Update 2: 10:44 UTC - "The issue has been identified and a fix is being implemented," Fastly said. Some services, such as Reddit, are returning by moving off of Fastly's network.

Update 3: 10:57 UTC - "The issue has been identified and a fix has been applied. Customers may experience increased origin load as global services return." On Twitter, the company added: "We identified a service configuration that triggered disruptions across our POPs globally and have disabled that configuration. Our global network is coming back online."

Fastly customers may see their sites suffer a second outage as their application servers have to suddenly catch up.

Update 4: 12:41 UTC - "Fastly has observed recovery of all services and has resolved this incident. Customers could continue to experience a period of increased origin load and lower Cache Hit Ratio (CHR). 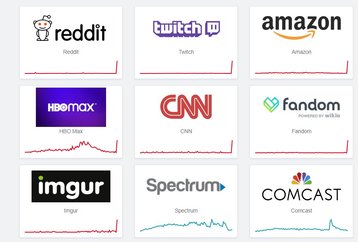 Original story continues: Fastly says that it is "currently investigating potential impact to performance with our CDN service."

This is a developing story