The European cloud provider has described its new cooling design, which submerges servers in vertical tanks which are filled with dielectric fluid - and also hold a separate direct-to-chip water cooling system for the hottest parts - the GPU and CPU, with a serpentine convection coil to provide an extra cooling surface. 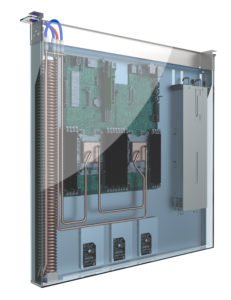 The design was announced one week before the Open Compute Project's OCP Global Summit next week in San Jose, California, which OCP engineers will be attending - although the design itself will not be formally shown at the summit, or offered to the OCP.

The system is protected by 16 patents, and provides a partial PUE of 1.004, according to a blog post from Ali Chehade, OVHcloud's R&D director for cooling.

It currently exists as a test system, featuring glass-fronted tanks. The company hopes to scale out a production version to its live data centers.

The 1U-wide sealed blades slot like books, into a "library-style" vertical rack, according to Chehade. The rack is a conventional size but holds its 48 servers vertically in three 16-U modules.

Chehade claims that the racks can even be mounted above each other in stacked shipping containers, giving up to two or three times the normal rack density of 37U per square meter.

Among other benefits, the racks have no pumps or fans, operating in silence with no cooling power consumption in the rack.

They can hold high power-density chips, and operate with water circulating at an inlet temperature of up to 45°C. The outlet temperature is 65°C, increasing the opportunity for heat recovery systems.

OVHcloud has used water cooling since 2003, with a proprietary circulation system in each server, connected to pipes in the racks, using bayonet joints - at least in the iteration seen by DCD in 2019. The cloud provider has also used 16U modules within its racks for some time: in 2019, it had stacked three horizontal racks on top of each other, with each "hori-racks" holding three 16U modules.

Effectively, the new system adds a sealed immersion tank to OVHcloud's existing water cooling system. The server blades have the OVHcloud proprietary cooling system taking cool pumped water to heatsinks on GPUs and CPUs via a serpentine pipe, and now the whole server is sealed in a tank so that all the other components can be immersed in the dielectric fluid.

"That fluid basically replaces the air circulating in OVHcloud servers thus enhancing the efficiency of any component not cooled by OVHcloud watercooling system," says Chehade.

The three-story rack can hold 48 1U servers or 24 2U servers. Each server is cooled independently and has its own environmental monitor.

The racks are passive, with no pumps or fans, and the high inlet temperature of up to 45°C means different cooling loads can be supported in different climates.

With this design, OVHcloud data centers would no longer need the evaporative cooling systems they currently have, says Chehade.

Overall, each server will use 20 percent less energy per year than an air-cooled server, and seven percent less than one using conventional cooling, he claimed.

How much will be shared?

At this stage, it appears that OVHcloud will be showing the system at the OCP Summit, because it says this is the best platform to share such technology.

However, it won't be immediately sharing the intellectual property rights and offering it as open-source hardware under the OCP model.

In an online conversation with DCD,.Chehade confirmed this: "We collaborate actively with OCP," he said. "We are working on open sourcing of some inventions as well, but the main parts of the presented tech is under patenting."

Concluding the blog post, Chehade says: "We are incredibly excited by the very first use cases of Hybrid Immersion Liquid Cooling in the fields of banking, medical and scientific research not forgetting gaming workloads, We can’t wait to share more with you in the future."