A $1 billion fuel cell-powered microgrid and data center project being built by Energy Innovation Park, LLC (EIP) and ThunderbirdCHP in New Britain, Connecticut, has received a 10 year sales and use tax exemption worth $55.2 million. 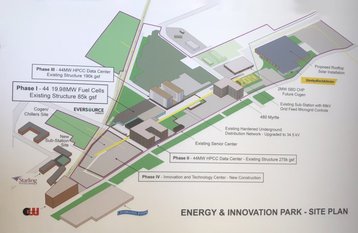 The tax break was awarded by Connecticut’s venture capital arm, Connecticut Innovations (CI). The exemption, which covers computing equipment purchased for the data center, is the largest of its kind to ever be handed out by CI.

Speaking to Hartford Business, Mark Wick, a partner with EIP, said: “This will put us on par with 23 other states that are competing every day to attract national data center operators to their sites, and it will apply only to the computing equipment after nearly $400 million is spent on the bricks and mortar.”

Construction of the project is expected to start with fuel cells in the fall, for a cost of $100 million. Phase II will convert an adjacent building into a 44MW data center, Phase III turns another building into another 44MW facility, and Phase IV aims to create an Innovation and Technology Center in a new building.

The full project could ultimately total $1 billion in investment.

Speaking to Hartford Business, Governor Ned Lamont said: “Given Connecticut’s proximity to major metropolitan areas and the needs of our municipal, state and private sector business clusters for these high-performance computing services, we can now compete with other states and transform an underutilized industrial complex into a modern IT campus that will generate significant local and state tax revenues, and high paying IT and related service jobs.”

When the State Department of Energy and Environmental Protection approved the fuel cell-powered facility last July, Governor Dannel P Malloy promised that the site would bring up to 3,000 jobs, $200 million in state tax revenue and $45 million in local tax revenue over 20 years. $8 million of that tax revenue would come from the fuel cell project alone.

EIP’s Wick has said that those tax figures are still accurate even after the exemptions are factored in: "There was always the expectation that the sales and use tax exemption would need to occur in order to get to a level playing field with other states and [sales and use] was never included in the state revenue number."