TeleYemen headquarters destroyed, company says the claim is a lie

The coalition claimed that the TeleYemen building was being used by Houthis to control drones that have attacked Saudi Arabia. Last week, Saudi forces intercepted an explosive-laden drone at Abha airport, but twelve people were injured by shrapnel.

The Houthi's Supreme Political Council has countered that the attacks on telecoms infrastructure are part of an effort to “commit more crimes away from the media.”

Last month, a Saudi air raid targeted a telecoms facility in Hodeidah, killing three children and bringing the Internet down across the country for four days. 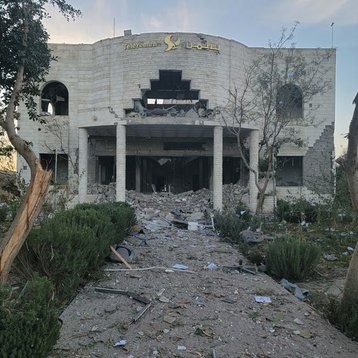 There are currently no reports of casualties, but information is limited. Saudi state TV said that civilians in Yemeni ministries had been warned to evacuate. The attacks also began at 2am local time, reducing the number of people likely to have been in the area.

"We have destroyed a communication system used to operate drone control stations," the coalition was quoted as saying by the official Saudi news agency SPA.

"The Houthis are using the Ministry of Communications and Information Technology in Sanaa for hostile operations," the channel added. The claim has not been independently verified.

The location has been described in some Western media outlets as simply a satellite ground station, but the facility is actually TeleYemen's headquarters, and home to offices, terrestrial connectivity services, and other telco equipment.

On Facebook, the company said that the destruction of the building would interrupt both domestic connectivity and international links. When Saudis brought down the Internet in January, businesses like banks were able to maintain connectivity through satellite links.

"The company also defies what is being circulated in some media about the use of the company's website for military purposes, and confirms that all technical equipment is used for civil purposes to provide international communication and Internet services to all citizens in various governorates of [Yemen]," TeleYemen said.

The company said that it was appealing to the international community to help "stop the repeated and systematic destruction of communication infrastructure."

TeleYemen said that it was working on resuming services despite the attack, and hoped to begin bringing things back online today.

Saudi Arabia has led a coalition to attack Houthi rebels in Yemen since 2015. While it is supporting the internationally recognized government, the conflict is widely seen as a proxy war between Sunni Muslim Saudi Arabia and its Shiite regional rival, Iran, which backs the Houthis.

It is joined by the United Arab Emirates, Bahrain, Egypt, and Jordan, and has been supported by the United States and United Kingdom - primarily through arms sales and intelligence gathering.

Seven years into the conflict, more than 100,000 people have been killed and four million displaced. Millions are on the brink of famine.

After hopes that the years of stalemate would lead to a diplomatic resolution, the conflict has escalated dramatically in recent months.