The headquarters of a crucial, if little known, Silicon Valley company could be set to be demolished to make way for a data center.

The report added that the buildings were not currently listed on the City's Inventory of Architecturally or Historically Significant Properties, but said that the analysis determined they were eligible for listing on the California Register of Historic Resources.

Following the report, a Historical and Landmarks Commission held a meeting this month and did not suggest listing the existing site. The HCL have not decided if the draft environmental impact report is acceptable.

As a mitigation proposal, Skybox said that it would build an interpretive display featuring an oral history of the company and the site. "The building itself is not deemed architecturally historic but we have actively been working with the city on this great new monument at the campus," the company told DCD.

A trip down memory lane 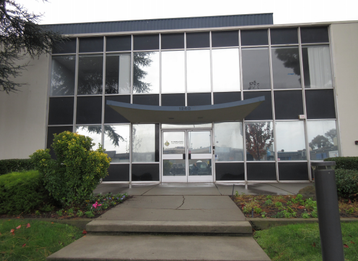 Memorex began in 1961 as an early pioneer in the computer tape industry. It soon became the first independent company to ship a disk pack, and the first to ship an IBM-plug-compatible disk drive.

When it entered the consumer business in 1971, the company turned to Ella Fitzgerald. To show off the high fidelity of its blank cassette tapes, they wanted to demonstrate that it could play notes that could shatter glass.

"They asked me to do the ending of 'How High the Moon.' I just kept singing, 'High, high the moon,' doing the ending," Fitzgerald remembered in 1985. "And when the glass broke, they said, 'That's the one!' Then I got the job... A lot of people say, 'Did you really break the glass?' We had to prove that. They had lawyers there."

She became the spokesperson for Memorex cassettes (ad below), with the famous tagline "Is it Ella or is it Memorex?," proving both successful for the company and leading to a resurgence in ticket sales for the jazz musician.

Memorex's great run came to an end when it was acquired by Burroughs in 1982. The company, and its successor Unisys, spun off, wound down, or sold different parts to Toshiba and others.

Most of those parts, including the consumer business that went to Tandy, also shut down or faded into irrelevance.

The brand was acquired by holding company Imation (now GlassBridge Enterprises) for $330 million in 2006, but sold it off to consumer electronics company DPI Inc for just $9.4m in 2016.

DPI sells a few Memorex-branded products, but little remains of the once-large company that played a part in the formation of Silicon Valley as the heart of the technology revolution. Little, that is, other than its campus.

First built in 1961, with additions constructed in 1964 and 1966, the headquarters served both as an office and as a manufacturing site.

As a multifaceted industrial campus including a "manufacturing plant, research and development facilities, and administrative offices, the subject property conveys popular trends in industrial development during the postwar era," the draft environmental impact report (DEIR) notes.

"Memorex Corporation holds particular significance within the context of the development of the modern electronics and computer industry due to its early innovations in the field of peripheral computer equipment."

Right next door, at 1600 Memorex Drive and 1700 Richard Ave, EdgeConneX is building a data center on land it bought for $83.3 million.

Skybox, which builds data centers for itself and others, plans to replace the Memorex with a four-story 472,920 sq ft (43,900 sqm) data center building with an attached six-story 87,520 sq ft (8,100 sqm) ancillary use office and storage component. It would also require associated substation, generator equipment yard, paved parking areas, and landscaping.

"Despite implementing all feasible mitigation measures, the DEIR concluded that the proposed project would result in significant unavoidable cultural resources impacts with [the] demolition of the former headquarters of the Memorex Corporation and the final site design of the proposed data center," the DEIR notes.

Under the California Environmental Quality Act (CEQA), alternatives were proposed, but rejected.

The DEIR proposes one alternative where just the more modern parts of the campus would be demolished, leaving the historically important parts intact.

A final alternative would be to not allow the project to go ahead, retaining all the existing buildings.

However, should the full construction go ahead, the DEIR says that a video project should be commissioned that records every part of the campus and any architecturally important features. Photographs and measured drawings should be made.

The video, which would be narrated and feature an interview with a Memorex employee if possible, could be displayed at an interactive stand in the data center's lobby. Or, because data centers don't want random people turning up, it could also be located at an offsite location, perhaps the Computer History Museum in Mountain View.

The museum held a 'Memorex at Fifty' reunion in 2011, which may help with the creation of an oral history audio and visual files mitigation effort, the DEIR said.

In accordance with CEQA requirements, the DEIR will be circulated for review until August 2, 2021. The project is open for public comment, although none have been received as of yet. 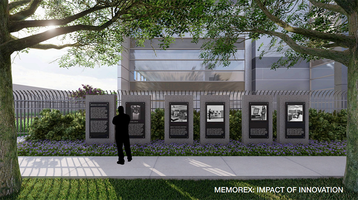 The Santa Clara Historical and Landmarks Commission met this month to discuss the project, where outside law firm Adams Broadwell argued that supporting the Draft EIR was premature, but the commission's advisor and city historian Lorie Garcia a preservation alternative. She submitted an advisory letter to the commission that the project be reduced in size so to retain the eligibility to be listed in the California Register of Historical Resources.

After discussion, the commission have not decided if the draft environmental impact report is acceptable. It will come back up to the HLC for further review in mid-August.

The results will be available on an interpretive display just outside the facility, a potential version of which is pictured.

The project is expected to be reviewed by the City Council before the end of the year.

This article has been updated