Data centers set to spread from Trading Estate to nearby Langley

Local authorities will decide this week whether to approve Zurich Assurance's bid to build a one million sq ft data center in Slough, UK.

Zurich has applied to build the facility on the site of the Langley Business Centre, some five miles East of the Slough Trading Estate, the UK's biggest hub of data centers. The proposal would demolish the Business Centre, next to Langley Station, and build a mixed-use development which would include some 60 homes, shops and pubs, and could include an Energy Centre and district heating system alongside the 93,000 sq m (1m sq ft) data center. 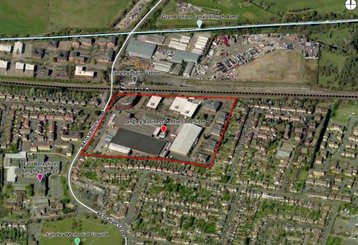 It is not clear whether the planned data center is for Zurich's use, but the application talks of "market demand" which suggests a commercial use for the data center space. Officers of the Slough planning committee have recommended the application be approved, saying its proximity to the existing Trading Estate hub means it would “take advantage of the site’s proximity to digital infrastructure in form of high-speed cable that links London, Slough and Berkshire, the West of England, and Wales," according to the Slough Observer.

The application was filed in December 2019, and includes a power substation for the data center. The houses and shops would be on a strip of land along Station Road, while the data center would take the vast majority (80 to 90 percent) of the land, away from the road.

The Energy Centre is "just one of the range of land uses that could come forward," says the application, which then describes how it would be operated by an independent energy supplier and would decrease the data center's environmental impact. It would use heat from the data center and be connected to a "possible future district heating network" which has space allocated in the plans.

"While market demand is understood to favor a single large facility, subject to demand it would also be possible to develop more than one standalone data center within this part of the site, within the upper floor area limit of 93,000 sq.m," says the application. To avoid annoying the neighbors, the facility would be 30m from the South and East sides of the plot, and within a security perimeter.

The data center would have a maximum height of 21m with parts up to 26m (roughly the height of an eight-story apartment building). The plan asks for 26 diesel generators, for emergency back up, each producing 104MW, along with another four gensets at the Energy Centre. The backup generators would operate for a maximum of 18 hours per year. Chillers on the roof are expected to be operating "continuously over the day and night" but within the normal background noise range.

The plan promises to replace trees that are felled, and provide a "green wall" for wildlife.

It seems the boom in data centers has been accelerating during the period of lockdown. Back in July, plans for over 2.27m sq ft of data center space had been lodged since March, according to EG Radius Exchange. Of 30 applications this year, 23 were filed during lockdown, with the volume increasing in June/July, including a 600,000 sq ft data center at Union Park from Ark Data Centres. To put that in perspective, the total for the whole of the last three years was 8.9m sq ft.