Telstra sells data center to Centuria REIT and leases it back

Australian telco continues to restructure its way back to health

Australian telco Telstra has sold a data center site in the Melbourne suburb of Clayton to a real estate investment trust (REIT) and leased it back for up to 50 years.

The site contains two data centers, one of which was opened in 2014. Centuria Industrial REIT bought both facilities for AU$417 million (US$300 million) and given Telstra a 30-year lease with two options to extend that for 10 years. Telstra will keep the IT and continue to run it, but is realizing the value of the real estate as part of its T22 restructuring program. 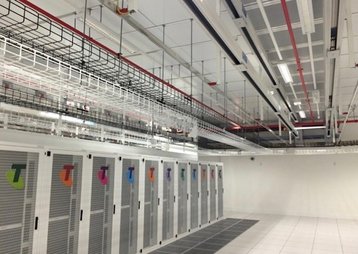 Inside the Clayton data center – Apol

“Data centers are an incredibly important part of the digital ecosystem and we continue to own and operate world-leading facilities in Australia and oversea,” said Telstra CEO Andrew Penn. However, the company's strategy requires it to realize assets: “As part of T22, we have an ambition to monetize up to $2 billion worth of assets to strengthen our balance sheet. This deal means we have now reached over $1.5 billion,”

The site has been up for sale since May, reaching its second round in July. Centuria is little known outside of Australia, but owns some 48 properties in various industrial sectors across Australia. The sale was underwritten by JPMorgan and UBS, whose real estate team was involved. Centuria is expected to issue an AU$341 million rights offer to finance the deal, according to the Financial Review

Described as a "triple-net lease-back arrangement", the sale means Telstra will keep all IT and telecommunications equipment, and have responsibility for ongoing operations, as well as building upgrades and repairs, future capex requirements and security.

As well as the new 6.1MW facility, the 3.2 hectare site includes an older 6.6MW data center, as well as eight other buildings.The site is 25km from the central business district of Melbourne CBD.

The transaction should be completed by the end of August.