After tweeting satellite images of data centers for a week, controversial document-leaking website WikiLeaks has published an internal list of all the facilities owned by Amazon Web Services in 2015, along with the colocation data centers it was using.

The 20-page document details the locations of AWS' facilities, information that the company has mostly managed to keep secret, or obscure through different company names. When contacted by DCD, AWS declined to comment. 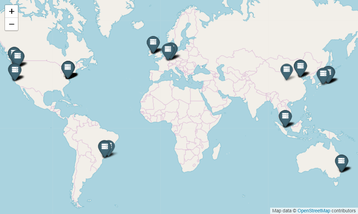 In the US, the company operates in some 38 facilities in Northern Virginia, eight in San Francisco, another eight in its hometown of Seattle and seven in northeastern Oregon. In Europe, it has seven data center buildings in Dublin, Ireland, four in Germany, and three in Luxembourg. Over in the APAC region, there are 12 facilities in Japan, nine in China, six in Singapore, and eight in Australia. It also houses infrastructure in six sites in Brazil.

Wikileaks has put the facilities on a map, for easier viewing.

As the document is from 2015, it does not list any new regions the world's largest cloud provider has since expanded into. It also does not take into account AWS' recent move to sell its Chinese infrastructure.

WikiLeaks' motivation for this latest leak is unclear. It purports to essentially release all files that are sent to it, after cursory fact-checking, and was responsible for important revelations on corruption, torture and collateral deaths during wars. However, the group is mired in controversy and scandals, with its contentious founder living in London's Ecuadorian embassy for the past six years after facing rape allegations.

In 2016, the group communicated with Donald Trump Jr., while releasing emails from the Democratic National Committee that are thought to have been illegally acquired by hackers employed by the Russian state, negatively impacting the Clinton election campaign. The group has been dogged by claims of Russian influence for several years.

In a press release for the latest leak, WikiLeaks mentions AWS' $600 million contract with the CIA, GovCloud and Secret Region facilities, and the Pentagon's JEDI cloud contract.

The organization states: "Currently, Amazon is one of the leading contenders for an up to $10 billion contract to build a private cloud for the Department of Defense. Amazon is one of the only companies with the certifications required to host classified data in the cloud. The Defense Department is looking for a single provider and other companies, including Oracle and IBM, have complained that the requirements unfairly favor Amazon."

Bids for JEDI are due today.

Due to the nature of its work, WikiLeaks has long struggled to host its content - with state actors and large corporations trying to take down the site via sophisticated hacks, sustained DDoS attacks and legal threats.

Until the summer of 2010, WikiLeaks was hosted by Sweden's PRQ, but shifted to Amazon Web Services after being targeted by DDoS. The relationship with AWS did not last long - in a matter of days, the cloud provider dropped WikiLeaks.

AWS said that it had stopped hosting the group as it had violated the company's terms of service - for example, it did not own the rights to the documents it released, and could be putting lives at risk.

Next, WikiLeaks moved in with French cloud and hosting company OVH - but again, the relationship was a difficult one. Facing criticism from the French government, the company obtained two court rulings to clarify the legality of hosting WikiLeaks. "OVH was not notified by LCEN [French Internet law] nor received any legal requests ordering the suspension of the dedicated server hosting the Wikileaks site and thus maintained service despite the fact that several members of the French government, at that time, had the opinion that such a site should not be hosted on French territory," the company has since stated.

For a time, WikiLeaks was also hosted at the the Pionen data center run by Sweden's Bahnhof, an underground facility set inside a Cold-War-era nuclear bunker.

At one point, the group considered moving its servers to the self-appointed Principality of Sealand, located on an abandoned fortress island in the North Sea.