ZAF Energy Systems, a manufacturer of nickel-zinc batteries (NiZn), will be outfitting a US facility for the data center firm, Capitol Power Group (CPG).

In a statement to Energy Storage, Jim Marsh, VP of Business Development at CPG, said: “The replacement of VRLA with NiZn batteries was made seamless with ZAF providing front terminals to match the original form factor.

“In addition to reducing weight by over 65 percent, ZAF’s NiZn batteries have exhibited proven top-of-class performance through extensive testing.

Kirk Plautz, ZAF Energy Systems’ VP of Business Development, said: “The deployment into a global data center operator with a respected partner such as CPG will send a message to the market that NiZn is a viable solution for this application because of the economic and technical advantages it offers.” 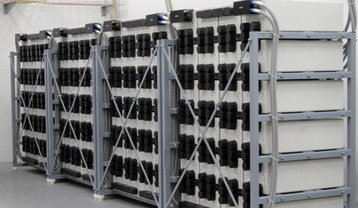 VRLA batteries, the kind that are being replaced by ZAF – KGPCo

ZFA is by no means the only company working on integrating NiZn cells with the data center industry. Nickel-zinc cells have been around for more than a century - they were originally developed by serial inventor Thomas Edison - but the applications were limited due to a low number of charge cycles, an issue ZincFive claims to have solved.

Also, NiZn batteries will last for the lifetime of the UPS system, unlike lead-acid cells that have to be replaced and recycled every few years. Despite this, NiZn batteries are relative newcomers to the data center scene, with lithium-ion batteries seen by many as a natural successor to VRLA.

In May, ZAF signed up to help upgrade the power systems for the aerospace company, Aerojet Rocketdyne.

“We are excited to work with Aerojet Rocketdyne. Together we will make our nickel-zinc battery systems smarter and expand our reach for mission-critical applications.”

In October, ZAF was also awarded a $1.4 million contract for a NiZn battery system to support a US Air Force intercontinental ballistic missile (ICBM) ground facility.