Is it possible to run a conventional cooling system - but use water instead of harmful refrigerant gases? We found a firm that thinks so

These gases are being phased out by industry agreements such as the European F-gas regulations.

But what if it were possible to have a refrigeration system that uses water as the working fluid - and uses it in a closed circuit so it doesn’t get consumed?

That’s what German tech firm Efficient Energy claims to have, with its eChiller: “The eChiller is the only refrigeration machine that works with pure water as a refrigerant and has an energetic performance that exceeds the state of the art by a factor of four to five,” claimed Juergen Suss in a video on the company’s site. Suss served as CEO and CTO in the company’s early days from 2013, before leaving to join Danfoss.

The current management is finding a boost from changes in the industry: “The refrigerant market is currently undergoing a huge transformation,” says Thomas Bartmann, sales director at Efficient Energy, Bartmann. “With the goal of cutting emissions, the EU enacted the F-Gas Regulation which will drastically restrict the use of traditional, HFC based refrigerants, forcing operators to fundamentally rethink their cooling strategies.”

Perhaps to increase familiarity for those used to conventional refrigerants, Efficient Energy likes to refer to water as R718, its name in the ASHRAE/ANSI standard listing of chemical refrigerants.

And the device is somewhat familiar: the eChiller has the same components as a conventional chiller - an evaporator, a compressor, a condenser, and an expansion device. It uses the direct evaporation of water in a near-vacuum in a closed circuit, cooling the primary circuit through heat exchangers. 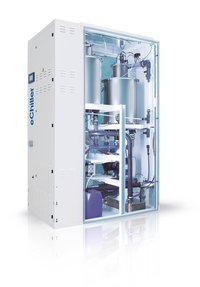 Bartman says Efficient has had products in operation since the end of 2014. A new chiller, the eChiller 120, was introduced in 2020 with 120kW of cooling power.

The system is in use in a few data centers already, including BT’s Hamburg facility, which installed three of Efficient’s earlier 40kW units in 2017. The BT data center uses cold aisle cooling, with racks arranged in 100kW “cubes” connected to power and cooling systems.

A trial showed the system could reliably deliver chilled water at 16°C.

At Sparkasse savings bank in Baden-Württemberg, Efficient provided of cooling to a warm-aisle containment system. In this case, the bank was gradually adding equipment in a building with a maximum capacity of 70kW. Efficient started with 8-10 kW and expanded that to 35kW.

With those and other projects under its belt, the company has established itself first in the DACH region (Germany, Austria, and Switzerland) and is now setting up a network of distributors across Europe in 2021, with partners signed in the UK, France, Sweden, and Norway.

Bartmann says Efficient is being approached by prospective partners: “As the only supplier of series-produced chillers that use water as a climate-neutral refrigerant, we see ourselves as a pioneer of sustainable refrigeration solutions.” 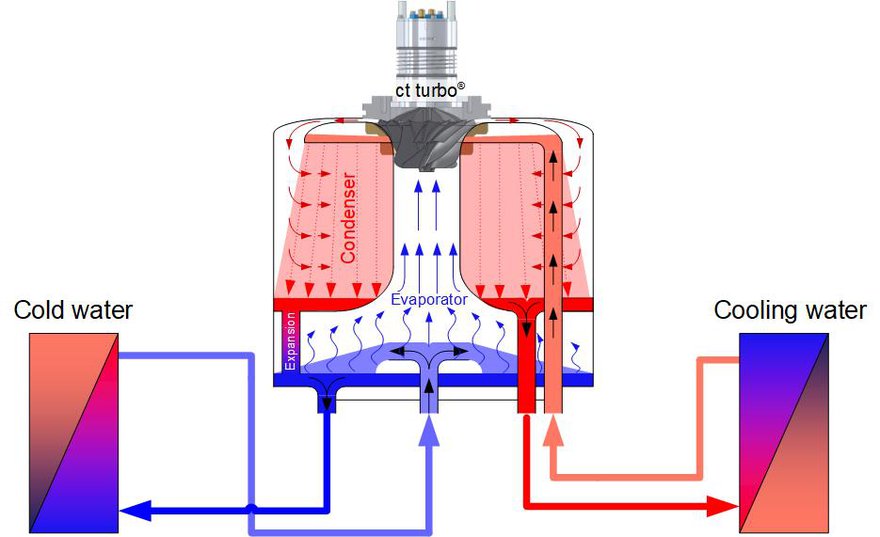